Many politicians are known to enjoy a privileged life, which is also benefitted by their families. There have been cases in the past where some people used the advantage of knowing a politician to get out of trouble. Some even enjoy a lavish lifestyle.

For example, a video of a Karnataka MLA’s son cutting his birthday cakes with an iPhone has faced criticism online. The guy has been identified as Suresh, the son of Kanakagiri (Koppal) MLA Basavaraj Dadesugur, reports Deccan Herald. 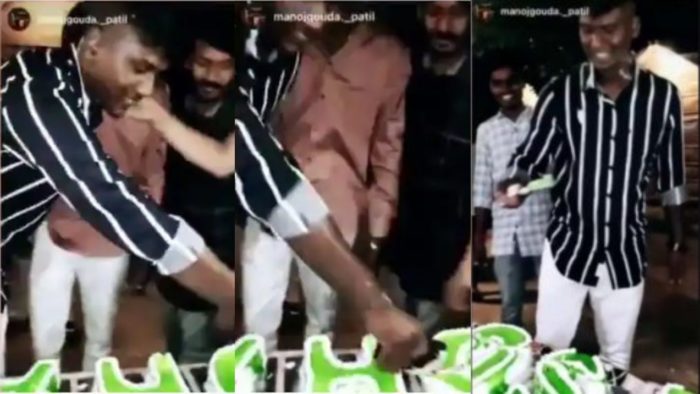 The birthday bash took place in Hosapete and the guy was seen cutting a total of 8 cakes. It was also revealed that Suresh took his friends from Kanakagiri and Karatagi for a ride in his BMW car, reports News18.

A Karnataka BJP MLA’s son has stirred a controversy by cutting his birthday cake(s) using his iPhone pic.twitter.com/zht6HhD12X

People online called the video a “display of wealth” and condemned it especially at a time when the Covid-19 pandemic has pushed millions of people into poverty.

many are struggling for one square meal, such ostentatious display of wealth by the MLAs family is an insult to the poor and deprived classes in the constituency

Look at the dads reply! no wonder kids turn out so weird. when your kids are wrong, correct them. first rule of parenting. useless

However, there were also some who said that there is nothing wrong with what the guy is doing, as long as he is doing it with his own money.

What if he is trying to shoot a unique type of birthday cake-cutting video? Stop making a big deal out of it. His father’s money, his lifestyle, and his way of life! Who are these media people to judge? Bother about where do you stand among them. Period. 🤦🏻‍♂️

He may use his own tool for cutting. It is his freedom of
expression.

Defending his son’s actions, MLA Basavaraj Dadesugur said that Suresh is celebrating with his hard-earned money. He reasoned that Suresh used his phone to cut the cakes as he didn’t want to use his hands, as the pandemic is still ongoing, reports Firstpost.

What are your views on this incident? Tell us!