College is universally recognised as the place where we finally don’t have to wear uniforms, can roam around freely with nobody questioning us, can occasionally bunk classes and not have the lecturers make it a big deal, and being able to carry cellphones. College is like the official gateway of adult life. Or so we thought…

Being able to carry cellphones to college is a given, right? However, MES Chaitanya PU College, Karnataka has banned the usage of cellphones in college. When the students did not abide by the college rule and continued using their phones inside classes, their Principal decided to take a drastic step. 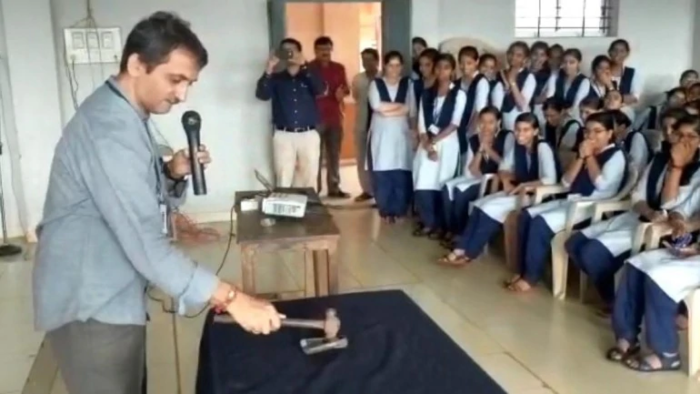 According to sources, the college authorities conducted a surprise check and confiscated 16 mobile phones. The students were then asked to assemble in the college hall. To the utter shock of the students, the Principal went on to ruthlessly smash 2 cellphones with a hammer!

A video of the entire smashing incident has gone viral. Have a look:

Speaking to sources, Karnataka Associated Managements of English Medium Schools general secretary D Shashi Kumar said that the situation in schools, as well as colleges, is “getting out of hand and such punishments are necessary”.

Netizens are slamming the Principal of the college for taking such a “mindless” step as punishment. Some claim that he had no right damaging someone else’s property.

He has no right to destroy anyone's property.

Mobile phone is very important now a days. Any other way was to select instead of this action.

This shows that the principal was very angry, and his mentality is like a angry child.

Merciless ppl!…think first what ru doing first!…everything has ITS value

the phones were not confiscated while the kids are using them but recovered from their bags in surprise checks. Who would be responsible when the kids are commuting some travel far and alone. Kids should be allowed phones in switched off or silent mode.

I seriously wonder if tht eccentric principal was also carrying cell phone thn students hv the rights to bang his cel as well.Rules should be applied to all nt just students. Cel phones should be confiscated only if misused or proven unethical activity,not for just carryin cel.

Very very strict principal..mf taking out his frustration here in school..bloody unworthy principal.instead of breaking there were many other solutions ..this ppschyopath

Was the Principal’s action justified? Let us know!

Nevertheless, a lot of us would suffer a mini heart attack if this were to happen to us!