Recently, standup comedian Vir Das dropped a video on YouTube titled ‘I Come From 2 Indias’. He spoke about the greatness and ills of our country and at the end expressed how despite the evils, India continues to be an example of grit, unity, and hope. While one section of our society lauded his work, another section accused him of insulting our country in a foreign land. FIRs have also been lodged against the artist.

Actor Kangana Ranaut recently addressed the issue on Instagram and called Vir Das a “criminal” and his monologue “soft terrorism”.

“When you generalise all Indian men as gang-rapists, it gives rise and encouragement to racism and bullying against Indians all over the world. After the Bengal Famine, Churchill famously said, ‘These Indians breed like rabbits they are bound to die like this…’ He blamed Indians’ sex drive/fertility for the death of millions because of hunger. Such creative work targeting an entire race is soft terrorism…strict actions must be taken against such criminals.” In another Instagram story, Kangana shared an old tweet by Vir and called him an example of a “creepy Indian man” who is “good for nothing”. 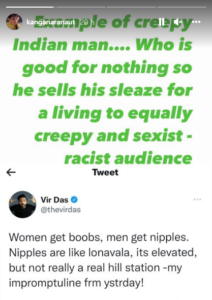