Bollywood actor Kangana Ranaut has been engaging in a lot of Twitter wars lately. And because she has been fearlessly expressing her views on a myriad of different topics, she is subjected to a lot of trolling and hate.

The ‘Queen’ actor recently shared a video on her social media wherein she revealed that she is being ‘mentally, emotionally and physically tortured’, reports The Indian Express.

Donning a white saree, Kangana disclosed how her house was illegally demolished and how she is being unnecessarily dragged in multiple cases. In the video, she said in Hindi, “Ever since I started talking about the welfare of the nation, people have been torturing me.” 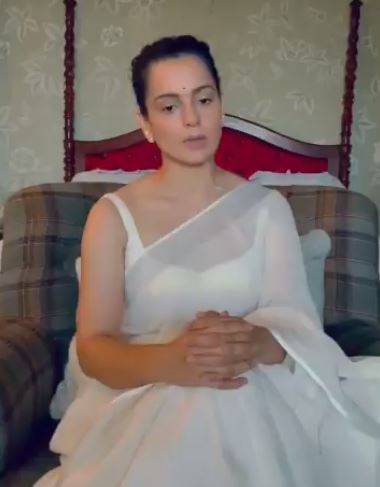 She added that a case was also registered against her sister Rangoli for speaking about the ill-treatment of the doctors at the beginning of the corona-era. “My name was also dragged in that case even though I was not even on Twitter at the time. Usually, this does not happen, but it was done. However, our Honourable Chief Justice rejected the case saying that it doesn’t hold water.”

She further shared, “Along with that, I was also ordered to mark my attendance at the police chowki. But I haven’t been informed of what kind of attendance is this. I have also been told that I can’t open up about the torture that I am being subjected to with anyone.”

“Therefore, I want to ask the Supreme Court of India, ‘Are we living in the medieval age where women are burnt alive and they can’t even talk to anyone?’ This torture is happening in front of the world. I want to ask people who are watching this drama unfold that the kind of torture we endured during the 1000 years that we were fighting for independence, we will have to endure that torture again if nationalist voices are mummed,” she concluded.

“Why am I being mentally, emotionally, and now physically tortured? I need answers from this nation. I stood for you it’s time you stand for me,” she wrote in the caption.

Those are some serious accusations levied by Kangana. What do you think about this?