Kangana Ranaut has been after Karan Johar literally ‘haath dho ke’. She also claims that with her back-to-back digs at him, she had made him more popular than all his work put together.

After the release of the movie ‘Brahmastra Part One: Shiva’ directed by Ayan Mukerji and produced by Karan Johar, she called it a disaster.

Now, when reports suggest that the movie is doing good at the box office, she thinks the numbers are manipulated. Taking to her Instagram stories, the ‘Queen’ actor wrote that she wants to interview Karan Johar and understand why is he sharing the gross collection of ‘Brahmastra’ and not the net collection.

“I want to interview Karan Johar and understand why is he declaring gross collection and not net collection? What is the desperation?”

She added that the net collection of the film is Rs 60 crore for two days which she doesn’t believe.

“Also, after making 60cr (that’s the net collection they have declared, I don’t believe in this number but Net amount India is 60 cr for two days according to them) even if we believe them how come 650 cr film emerged a hit already?

Calling KJo ‘movie mafia’ she asked him to explain the mathematics behind Brahmastra box office numbers. 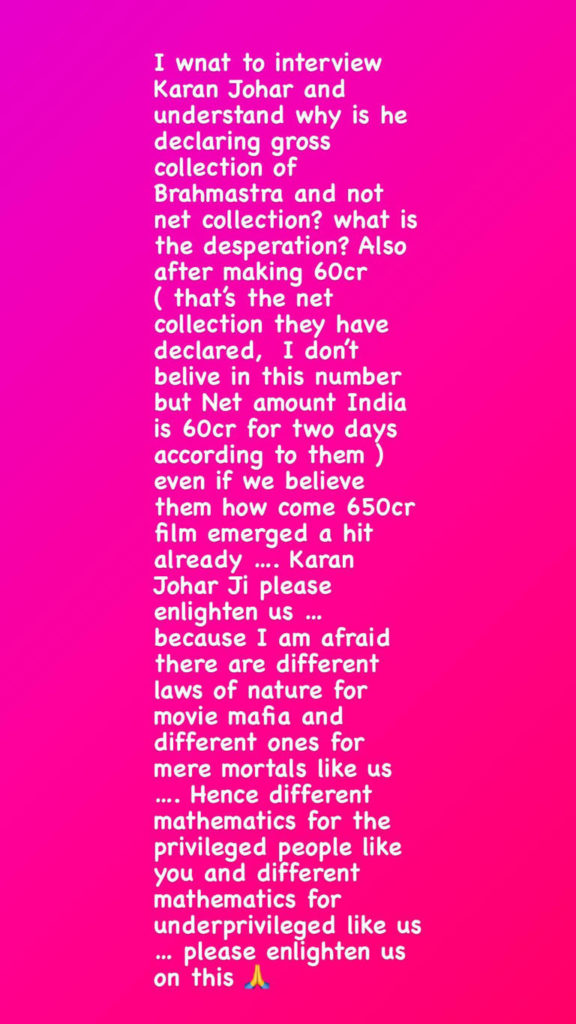 Following her statement, comedian Kunal Kamra took a jibe at her and tweeted:

Twitter was divided with her opinions. While some supported her, others slammed her too.

Can some legal guy sue #KaranJohar for spreading lies about #brahmastraboxoffice

She is giving it back and how…

This is the only way to expose corrupt mafia …

Well said Kangana….We r with u…

Even I want to learn that math of mafia Karan johar @karanjohar #BoycottBramhastra #BoycottbollywoodCompletely pic.twitter.com/7yWSlSL478

On SUN as per Dharma, #Brahmastra collectd 65 cr GROSS.
Clear 20 Cr DROP from SAT.
But have a look at Pet critics what they were tweeting.
Who gave them this data, PVR?#KanganaRanaut was right.
KJo why inflate bro? What’s going on?
Money Laundering/Share market FIX? pic.twitter.com/1uvQNkSZTu

People say it was scary while watching the movie. Ego is big problem in Bollywood ,PR is active and making the movie super hit but it is #Disaster 💯

Kangana said what she had to say. What is your take on this? Are the box office numbers manipulated?