During her time at ‘The Kapil Sharma Show’, when Kangana was asked what does ‘Bollywood Bimbo’ mean, she took a dig at ‘SOTY 2’ actor Ananya Panday, daughter of actor Chunky Panday.

The ‘Tanu Weds Manu’ actor mimicked Ananya and said, those who say “I can touch my tongue to my nose” are Bollywood bimbos. 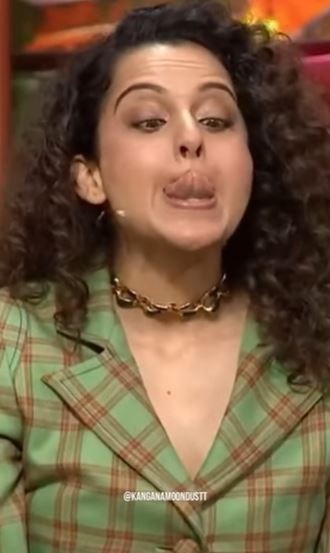 She was referring to the episode wherein Ananya came to promote her movie along with Tiger Shroff on the same show. She touched her nose with her tongue and called it her ‘talent’.

Taking another dig at star kids, she said that they ‘look weird like boiled eggs’.

She said so when she was asked why South Indian movies are doing better than Bollywood movies in the current times. Kangana opined that stars down South are deep-rooted in culture and more relatable.

“They are deeply rooted in culture. The way (the South Indian industry) has a connection with its audience, it’s very strong. As the industry (Bollywood) evolved, their (film stars’) kids go abroad to study, talk in English, and watch Hollywood movies. They even look weird like boiled eggs.”

#KanganaRanaut has described beautifully why films like pushpa,RRR impressed audience. While people don't like to watch starkid's films because people can't relate with their western culture. #nepotism https://t.co/nZxyMJc9Np pic.twitter.com/eSKC9jZDe7

In another interview with Hindustan Times, the actor also said that B-town celebs refrain from praising her work because of their insecurities.

“These people don’t want to praise me. Sometimes, I feel there is no lobby but people have a lot of their own insecurities.”

Recalling her recent meeting with ‘Shershaah’ actor Kiara Advani, she said, “The other day, Kiara met and she praised me. She said to watch both the films (Dhakad and Bhool Bhulaiyaa 2) and this and that. I don’t think there is pressure.  I always say everyone is a feminist till they actually see a woman rise. Phir thoda sa hurt hota hai.”

Kangana added that she is ‘always the first one’ to praise others’ work. “Whenever I see some work, whether it is ‘RRR’ or ‘Pushpa’, I praise it.”

Well, everyone has opinions and so does Kangana.