Kangana Ranaut: “Hollywood Has Destroyed Other Industries By Creating A Global Monopoly”

Right from the time she called ‘Bollywood a toxic place’ to when she claimed ‘India doesn’t need more oxygen’; Kangana Ranaut has been unapologetically vocal about her opinions in the past. Speaking of ‘Thalaivii’ Ranaut says that she had reservations about portraying Jayalalithaa on screen.

HT reports that Kangana believed Jayalalithaa’s acting style was ‘different’ from hers and ‘more mainstream’.

Kangana was also hesitant to put on weight for the role, “The sheer obstacles in my 30s to gain 20-25 kgs of weight… Who knows how I will look after gaining? Will I even be attractive? There were so many doubts that I had,” she said.

It was director Vijay who actually convinced Kangana she was perfect for the role.

In a recent press conference, TOI reports that Ranaut  spoke of her opinions on Hollywood films. The actress also took to Instagram to share a strong-worded note on her stories.

“Hollywood has destroyed other industries by creating a global monopoly. They are taking over our screens. We would rather see the dubbed version of Lion King or Jungle Book over dubbed version of a Malayalam film’,” she wrote. 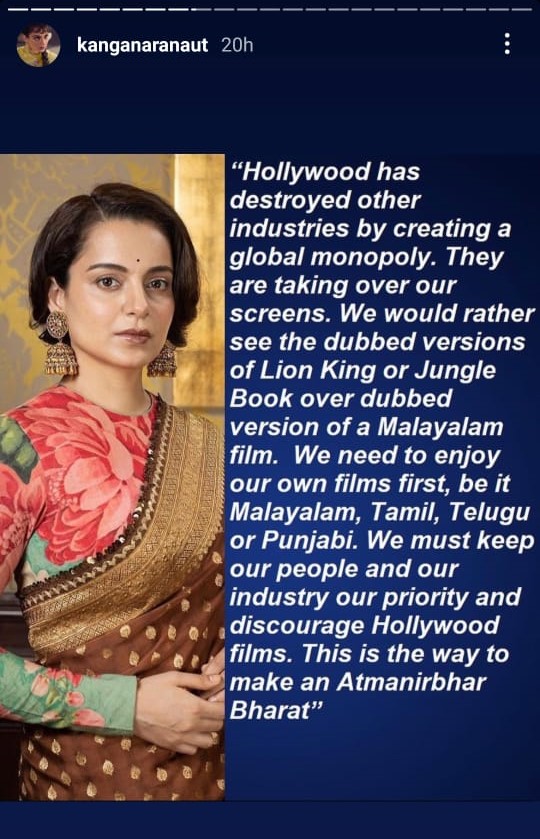 Requesting desis to watch more Indian films, Kangana said, “We need to enjoy our own films first, be it Malayalam, Tamil, Telugu or Punjabi. We must keep our people and our industry our priority and discourage Hollywood films.”

What do you think of her views? Tell us.