‘Jugjugg Jeeyo’, a Dharma Productions film featuring Anil Kapoor, Neetu Singh, Varun Dhawan and Kiara Advani is to release in theatres soon. The trailer for the film just dropped and no matter how entertaining the film might seem, it has already started brewing controversies.

According to The Indian Express, Pakistani singer, Abrar Ul Haq has accused ‘Jugjugg Jeeyo’ and Dharma Productions of stealing his song ‘Nach Punjaban’.

“I have not sold my song ‘Nach Punjaban’ to any Indian movie and reserve the rights to go to court to claim damages. Producers like @karanjohar should not use copy songs. This is my 6th song being copied which will not be allowed at all,” he tweeted. 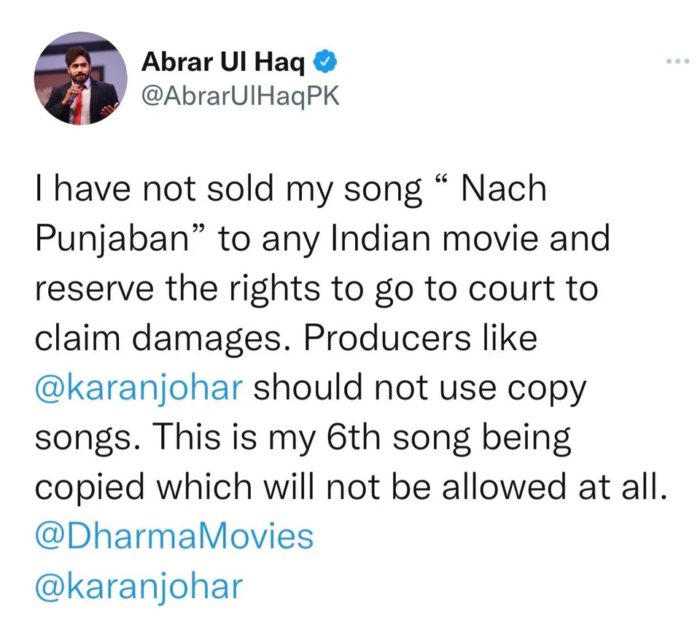 That’s not all. According to DNA, a creative executive producer, screenwriter and chartered accountant named Vishal A. Singh took to Twitter to allege that Dharma Productions copied his story without giving him any credit. He claimed that he shared the story with Dharma back in 2020.

Had registered a story.. #BunnyRani with @swaindiaorg in January 2020. I had officially mailed @DharmaMovies in February 2020 for an opportunity to co-produce with them. I even got a reply from them.
And they have taken my story.. and made #JugJuggJeeyo. Not fair @karanjohar.

He added screenshots of the mail that he allegedly sent to Dharma and said that he would lodge an official complaint against the company.

His story was named ‘Bunny Rani’ and revolved around a “middle-class couple” married for 25 years who decide to get divorced to pursue their own separate passions after their kids become well settled.

Please read extract of the synopsis of #BunnyRani I had mailed to @DharmaMovies in Feb 2020. And then go on to watch the #JugJuggJeeyo trailer and judge by yourself. 🙏https://t.co/c4oxhOZH80 pic.twitter.com/etonIJ2DyT