I won’t start by telling you guys who Joey Tribbiani is, and how awesome he is, and how he has captured everyone’s hearts blah blah blah. Because honestly, who doesn’t know Joey Tribbiani? And those who don’t, this sin is too grave to be forgiven.

So anyway, Joey is adorable but, let’s face it, he is known for being a teeny tiny bit dense. But if you actually stop laughing enough after Joey mistakes his phone number to be the telephone bill, or when he thinks saying “whack” makes him a cool 19 year-old, you might notice that there are moments when Joey actually has spewed some wisdom – maybe just for a few seconds – but definitely something that is enlightening!

2. When he motivated Ross to not give up

3. When he expressed a tangle of emotions in one sentence

4. When he promoted a healthy body image

5. When he gave you a simple lesson on how not  to care

6. When he told you it’s okay to cry over “Titanic”

7. When he put forth a question which must have escaped quite a few brilliant minds

8. When he had an answer even to this question:

9. When he taught you that a little pat on the back is necessary…even if it’s from you…to you!

10. When he gave you English lessons

11. When he taught you the importance of listing down every thing you can do, on your résumé

12. When he gave you one simple advice for a problem you did not know how to solve

13. When he was this good at remembering the days of the week!

14. When he had this one question, which left the entire world wondering how they never thought about it before

15. When he gave you intense advice on friendship

16. When he was hungry and philosophical at the same time 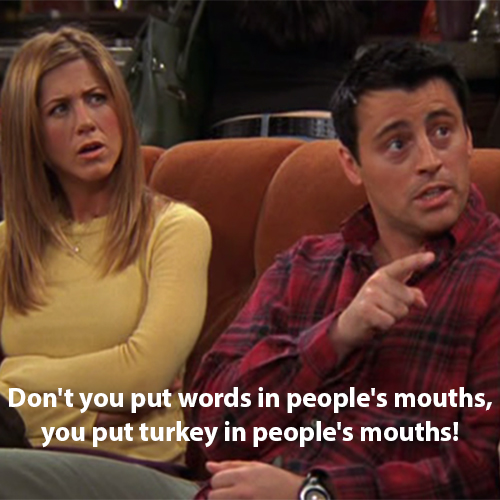 17. When he told you it’s completely okay to be selfish

That’s right, he is the complete package! 😉