The last couple of years have been trying times for the Bollywood industry with some of the most legendary actors leaving nothing but their legacies behind. Just recently, the untimely demise of veteran female superstar Sridevi shocked us all. It hasn’t even been two weeks since the incident and we had to cope with other sad news.

Apart from the natural death of actor Shammi, the woman who had acted in more than 200 films and whose careers spanned over 5 decades, we also had to let Irrfan Khan’s announcement of ‘rare disease’ sink in.

The actor clearly mentioned in his announcement that once he gets a conclusive diagnosis from the doctors, he will tell us all the details we need to know. However, the media, just the way sensationalised Sridevi’s cause of death, wasted no time in speculating what Irrfan’s ‘rare disease’ could be.

Many leading news channels started running a story that claimed that the rare disease Irrfan is suffering from is Glioblastoma Multiforme grade IV, also called the ‘death on diagnosis’ disease. 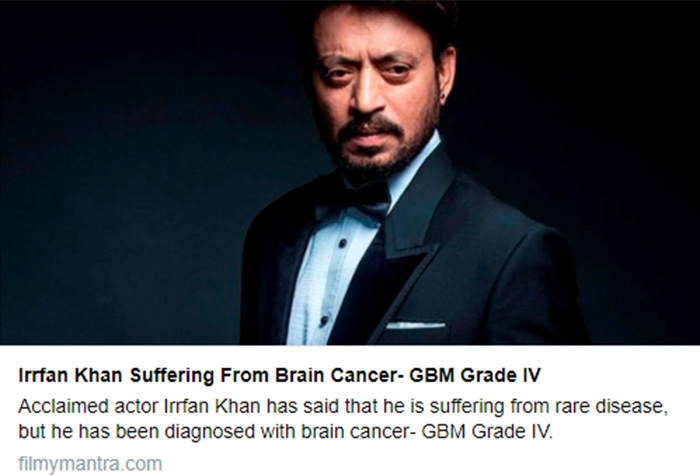 It wasn’t until Irrfan’s friend and trade analyst, Komal Nahta shut down the rumours that people stopped speculating the worst that could be. Komal tweeted saying,

Although IrrfanKhan is unwell, all malicious news being spread about him and his condition since an hour or two are untrue. Likewise, all other horrendous news relating to his hospitalisation are fake. By God’s grace, Irrfan is in Delhi and that’s the only truth.

Irrfan doesn’t have brain cancer, neither is he admitted to Kokilaben hospital in Mumbai. He has asked for time from his fans and promised to keep them updated about his health. Why is it so difficult to give him that time and space?

I completely understand the love fans can have for their favourite celebrities, and it is heartbreaking to know that someone you idolise and love might be suffering from something like a rare disease.

But that does not give us any liberty to invade someone’s privacy to an extent where we start rumours about their health, family and affairs. We need to understand that celebrities are people too and they are entitled to the same privacy as any normal person.

Our prayers to Irrfan Khan for a speedy recovery, and a request to fans to stop speculating and spreading rumours.