35 Iconic Photos Of Indian Cricket That Will Give You Goosebumps

An outlet for strong emotions.
A topic of debate.
An integral part of our life.

This is what cricket means to me and my generation.

I started watching the game in 1999. The real wow moment of my cricketing memory has to be India-Australia test at Eden Gardens. A young lad taking a hat-trick and two classy batsmen winning the Test for India against the best side of the world from being forced to follow on, is something I will cherish for the rest of my lifetime.

Not just these, there are certainly hundreds of moments in Indian cricket that have captured a permanent spot in the hears of the people. So here are some unforgettable images from Indian cricket which will surely entertain you.

2. Eknath Solkar taking a brilliant catch to dismiss England’s Alan Knott at The Oval in 1971.

4. The year that changed the dimension of the game in our country.

5. Ravi Shastri was presented an Audi 100 (which was no less than a royal ride then) for being the ‘Champion of Champions’ in the 1985 Benson & Hedges Cricket World Championship.

6. In 1989, he debuted for India at the age of 16 and became the third youngest player overall to play for any country.

9. Two young batsmen, one from Bangalore and the other from Kolkata made their debut for India.
That game changed the fortunes of Indian cricket forever.

‘Desert Storm’ because of the conditions it was played in and the brutal manner in which he demolished Australia.

12. Sachin Tendulkar scored an emotional 140 not out against Kenya in the 1999 World Cup after his father’s demise and injected some life into the campaign.

13. The epic 376-run partnership between Dravid and Laxman that destroyed Australia at the Eden Gardens.

14. Dada taking off and twirling his shirt wildly after defeating England in the Natwest Series final.

16. The sight of Anil Kumble emerging from the pavilion, ready to bowl with his face bandaged, in the Antigua Test of 2002.

17. Sachin Tendulkar scoring an iconic 98 to guide India to yet another World Cup victory over Pakistan.

20. Irfan Pathan’s hat-trick in the very first over against Pakistan.

21. The unforgettable day at Kingsmead when Yuvraj Singh etched his name into the record books by hitting six consecutive sixes off a hapless Stuart Broad.

23. The dive that defined Gautam Gambhir’s dedication during the 2011 World Cup finals.

24.’Dhoni…finishes off in style! India lift the World Cup after 28 years!’

25. When The Wall was the last man standing, the only one among 10 other ‘boys’ and scored an unbeaten 146 against England.

26. When Dhoni asked Dada to captain the team – one last time.

27. The batsman with the most ODI runs became the first to score 200 in an innings.

28. Sachin Tendulkar walking out to bat one last time during the second Test between India and West Indies.

29. When Yuvraj Singh sought God’s blessings and the whole of Lords cheered.

30. When our childhood heroes retired one by one.

31. Then The Royal Bengal Tiger. 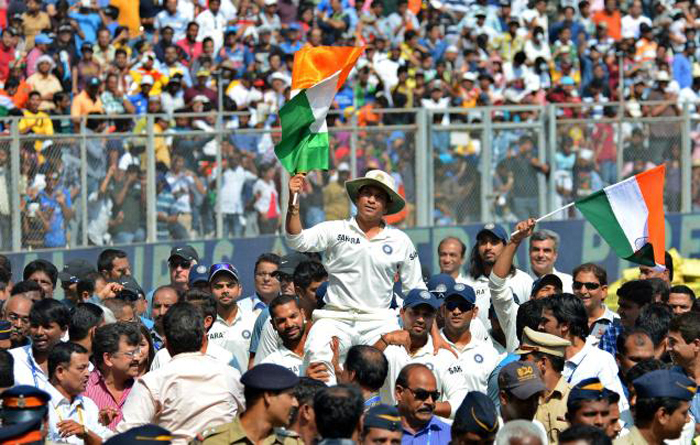 35. And Captain Cool abruptly announcing his retirement from Test cricket.

You might end with goosebumps after watching them. But the fact is, Indian cricket has seen it all.