Home Food For Thought Another Win For Net Neutrality. Indian Brands Are Withdrawing From Facebook’s Internet.org

Irrespective of whether they actually know what it really is about, the hot topic of discussion for Indians right now is undoubtedly net neutrality.

The Telecom Regulatory Authority of India (TRAI) received over 800,000 emails supporting net neutrality, after it floated a consultation paper on regulatory framework for over-the-top (OTT) services and applications on the internet on March 27.

Flipkart had entered into a tie-up with Airtel for Airtel Zero – wherein customers would not be be charged while surfing the Flipkart website.

However, after receiving significant backlash, Flipkart – the biggest e-commerce portal in India– has pulled out of the deal.

We at Flipkart have always strongly believed in the concept of #NetNeutrality, for we exist because of the Internet. http://t.co/XTxK9l6cdU

A day after Flipkart exited from the Airtel Zero platform, Times Group, NDTV, Cleartrip, Newshunt announced that they are stepping away from Facebook’s internet.org initiative. Internet.org is a partnership between Facebook and seven mobile phone companies that has been launched in order to improve internet access in eight countries including India since August 2013.

NDTV is committed to net neutrality and is therefore exiting, and will not be a part of, Facebook’s http://t.co/r3IZLs9qEJ initiative.

Add to that- travel site Cleartrip also backed out of internet.org

Time to draw a line in the sand, Cleartrip is pulling out of http://t.co/S7VKhY4RC7 & standing up for #NetNeutrality http://t.co/JtpCtbK0AT

And then this happened: 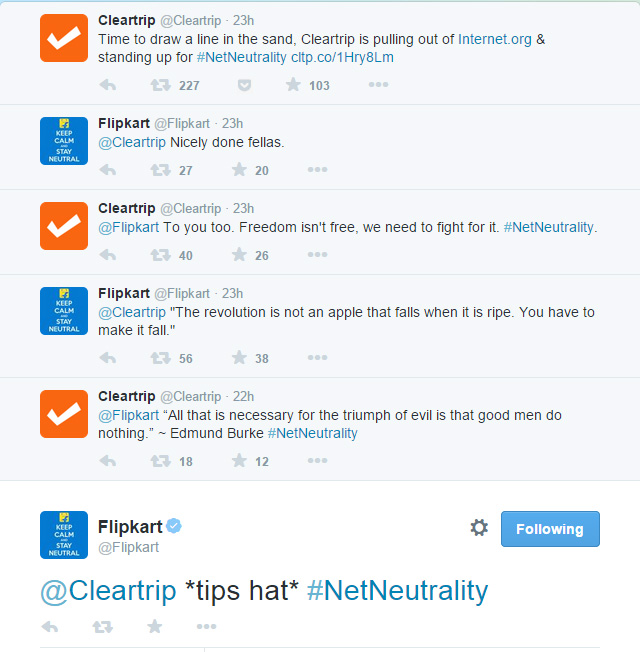 It’s time for the ardent supporters of net neutrality to rejoice!

As if all this did not sound too good to be true, the Chairman of The Parliamentary Standing Committee on Information Technology, Anurag Thakur, spoke out in favour of net neutrality.

Prospect of commercial gains should not limit the innovative & entrepreneurial potential of the internet. #NetNeutrality

Costumers must have freedom of choice once they have paid the telecom operator for a data pack. #NetNeutrality

Oh, and just one more thing:

According to the Economic Times, a senior TRAI official admitted that Airtel Zero is indeed violating net neutrality.

“From the looks of it, Airtel Zero and many other plans including Facebook’s Internet.org tie-up with Reliance Communications and the free WhatsApp, Facebook offers by other telcos seem to violate net neutrality.”

If you’re still not convinced, let All India Bakchod explain you the concept in their own style.Watch this animated video for further clarification. Also read how Reddit India helped an MP write to TRAI supporting net neutrality.

Go to www.savetheinternet.in and send in your mail. It’s an easy process, and it’s worth it. #NetNeutralityIndia