When we are younger, we’re more prone to delusions. Our parents told us we should be good or else some imaginary ghost-like being will come to get us at night doesn’t really help the fear or the delusion. So it comes as o surprise that some children start having imaginary friends.

These ‘friends’ have names, shape and voice. They are real for the child imagining them, but if they ever told the adults about it, they’d be shocked for sure.

Imgur user Sierra too had imaginary friends from the age of 9 to 13. She stopped seeing them at 14-year of age when she was out on heavy medication. But she never stopped believing in them.

“I honestly miss them and I like to think they are real. They are just waiting for me somewhere else.”

Before you say it, I’ll do the honours myself. Yes, this isn’t normal and she did need help. Thankfully, she got the required medical help and stopped seeing them.

“I was a mentally unwell child. Had unnecessary anxiety, depression, etc. I was a special ed student because of my “friends”. I would talk to them all the time, they’d tell me answers on test questions, would tell me about life outside of Earth, would help me develop as a person and understand others and myself. They were a huge part of my life.

My parents were worried but didn’t know how to help. They took me to doctors, etc. But I played dumb. Pretended I was normal, like they didn’t exist. I was good at acting.

They deemed me an anxious child and put me on meds but that didn’t make my friends go away. Long story short, I was put on stronger meds years later after a bad mental collapse. They told me they had to leave because my brain no longer had the mental capacity to comprehend their existence.

I cried, wanted them to stay. They wanted me to get better, said I needed to live a normal life and I’d see them “later”.

I think about them at times and I like to think they are real. I know they are not. But my heart says they are. I’m still getting mental help, I’m completely normal now, you’d never think I was like that or had these delusions.

Just thought I’d share with people who don’t give a shit. It’s just nice to tell someone who is not a doctor.”

People showed a lot of empathy, kindness and understanding towards her after she shared her story. Some even wondered what her friends looked like.

So in a follow-up post, Sierra shared rough sketches of her childhood ‘friends’ and it is sure to give you chills at first. She describes them in vivid detail.

Here’s what she said about each one of them. 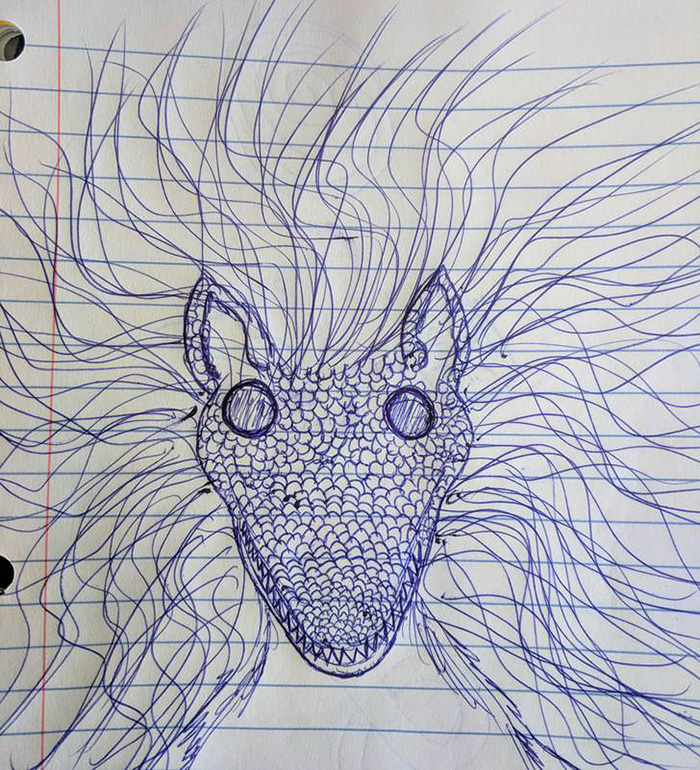 “This is their face. They had what seemed to be horse-like ears, the face of an alligator/wolf hybrid, and huge eyes that were like souless orbs. They had hair that defied gravity and was a bright red and orangeish colour. Their face a deep green yet when the light hit their scales they were of a colour I can’t describe. Their eyes this strange brown and grey mixture.

They told me to never stare into their eyes for too long because “That is how we trap them. This is our way of knowing and not knowing, our way of feasting”.

I got so scared that I would confide in Subterra Angelo (I’ll try and draw her soon too) and she created this special mask that looked very high tech. It would prevent them from doing harm to me and others. They were willing to put it on.” 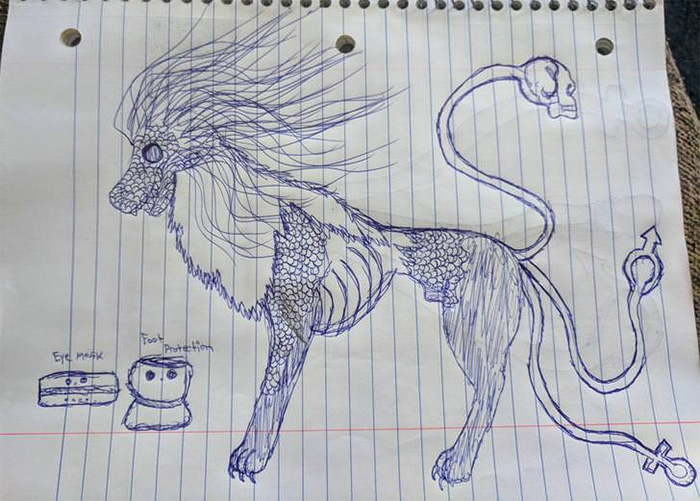 “My attempt at a full body. They had three tails with the male and female symbol at the end of two, and the third had a human skull. They said that it was how they ate and consumed the souls of those they trapped. They didn’t eat with their mouth but with the skull.

They also had paws that could instantly put someone to sleep, so they needed special foot ware to combat their ability. They complied because they “liked the girl with a strange mind”. They were not mean to me, never malicious, just a very honest and wise creature that came from somewhere I can’t explain.” 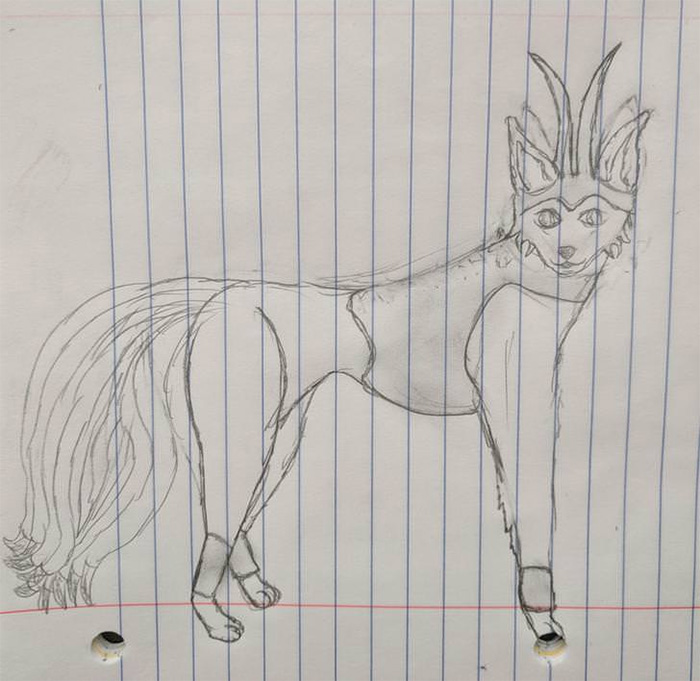 Her name was Subterra Angelo.

This is the best way I could remember her, but even this doesn’t come very close to what she looked like. It’s hard to explain, but her very existence was that of love and light. It was like looking at God, but she wasn’t. She was so warm and beautiful, a feeling I’ll never forget. She wasn’t very tall, about 5’0″ in total.

She had the purest white fur that glowed in this indescribable light that made you want to get on your knees and cry. She had the deepest blue eyes I’ve ever seen, so inviting and lucid. She also wore this golden armour that had all of these patterns and strange writing, but for the life of me I can’t remember what I looked like, hence why in this pic her armour is blank. It was almost Runic, but it wasn’t. She was somewhat like a wolf, but thin and cat-ish?

She also had about 15-20 tails that wrapped in this sort of bulb. She said if she opened her tails, she’d release “the truths of time and space within mortality”.

She told me about what life was like outside of Earth, a bit about where she came from, etc. She said, “life outside of this universe if an interpretation of the beholder’s mind, for humans cannot comprehend it”.

I still remember everything she has told me, and I hold it close to my heart even if she wasn’t real.

Thanks for reading and I’ll draw her sister soon as well!”

Sierra is getting the help she needs, but this just goes on to show how vivid our child-like minds are and the things we are ready to believe in. It is scary, but her belief in them and their kindness for her is beautiful.