Trains in India are the most popular mode for travelling due to its affordability. But that comes with its own set of problems like low availability of seats, no sense of punctuality and lack of cleanliness. Now, the Government has tried to mend these cracks by introducing Clean My Coach and various apps for availing Tatkal quotas. However, these are the problems that we can see and report. What about those which are happening behind our backs?

In a video that has recently gone viral, a vendor can be seeing coming out of the train’s toilet with tea and coffee cans, thus implying that it was made with toilet water. 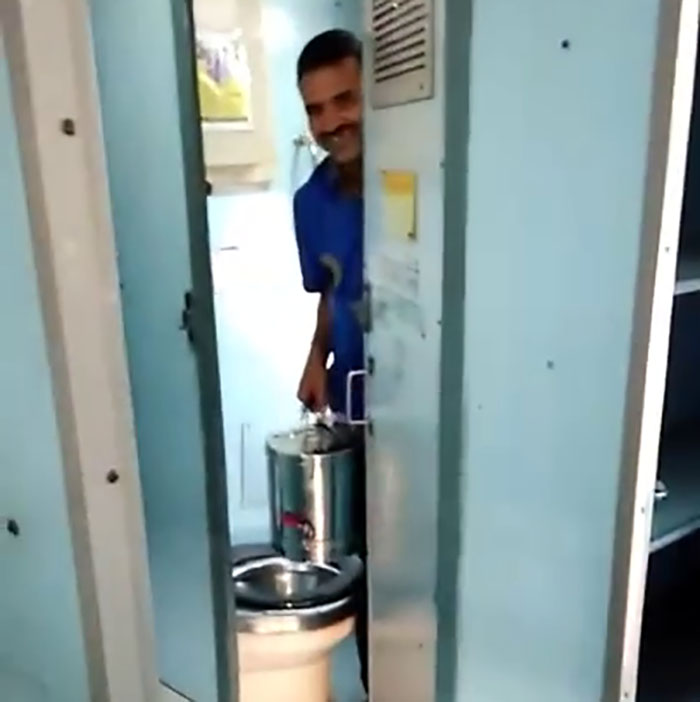 Reportedly, the video was uploaded on December 2017 by a passenger who was aboard the Chennai Central-Hyderabad Charminar Express. When the train had stopped at Secunderabad, the passenger began recording the vendors exiting the toilet with three cans of tea and coffee.

As the video goes on, we can see the vendors trying to avoid giving an explanation and then passing on the cans to another vendor on the Secunderabad Station. Although we don’t see them mixing the toilet water, taking those cans (which they’ll serve from later) into the toilet is disgusting enough.

As this was a problematic situation for Indian Railways, they took immediate action after getting reports about this incident. According to DNA, South Central Railways’ Chief Public Relations Officer, M. Umashankar stated that,

“An inquiry was conducted, and on the basis of it stringent action has been taken up against the Train Side Vending contractor for the section between Secunderabad and Kazipet, P. Sivaprasad, with whom the identified vendor in the video was employed. A penalty of ₹ 1 lakh has been levied on the licensee, through the IRCTC, the contracting agency.”

Kumar further elaborated that the two vendors in the video have been removed. Additionally, another railway official said that a strict vigil is being kept to prevent any form of unauthorised hawking at train stations.

It’s certainly relieving to see that the authorities have taken action against the condemnable act. However, what’s scary is how train station vendors can put the passengers’ health at risk just to save some money on their part. So, while we can trust Indian Railways to keep improving the system, we must stop purchasing from train-side vendors for our own sake.