You know how they say ‘Don’t believe everything you see on the Internet’? Some things that we see online look so unquestionably real that we have no choice but to believe it. And with news on social media travelling faster than the speed of light, there’s no way one gets the chance to check facts before setting store by something that everyone collectively believes in. Take the train selfie video, for example.

On January 24th, a rather terrible video went viral of a Hyderabad youth trying to click a selfie video pointing to a train that’s fast approaching from behind him. The video ends abruptly at what looks like the train smashing hard into the man’s hand. 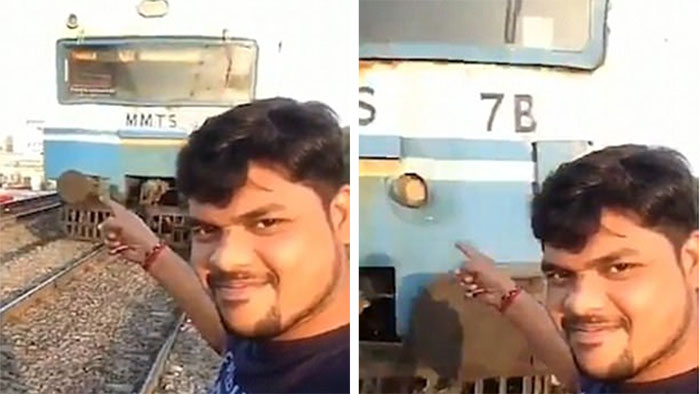 As is with news in our country, soon enough varied versions of the story began circulating. Some claimed the man was in a hospital with severe injuries; others claimed he was absconding.

But one thing that everyone seemed to agree upon was that the stunt was utterly stupid.

So imagine the utter frustration that people felt when they found out that the video was, in fact, a PRANK!

If this kahaani mein twist is making your blood boil, then wait till you see this video, shared by a journalist from India Today, of the youth mocking the video along with his friends.

Now that's what I call a miracle !! The stupid Selfie man hit by speeding train is doing fine with no visible or serious injuries. #Hyderabad pic.twitter.com/I7aYWUFnzX

As you can clearly see, he is all hale and hearty, and seems to be super proud of what he has done. #NoRegrets

Thanks to another journalist, who also tweeted about the video, we now know a bit more about the man too, who it seems is finally absconding.

This guy Shiva n his friends created MMTS train accident fake video, fooled ppl as accident took place, this guy works in a gym at Madapur as general instructor, got this info from my teammate who goes to this gym, now this guy is absconding pic.twitter.com/QebASR3FcS

What’ll probably get you even more pissed off about this whole episode is his reason for the prank. Apparently, he claims he was trying to create awareness about the value of life when weighed against the dangers of taking such selfies.

I, for one, am not sure we want an awareness drive so horrific, no matter how grave the issue is or how noble the person’s motives are. What about you?