Husband Pranks Wife Pretending To Be A Celeb, Feels Heartbroken When She Sends Him Nudes

Well, this man also tried to play a prank on his wife by pretending to be her celebrity crush. But rather than getting a good laugh, he got the shock of his life, reports The Sun.

Narrating the incident on social media, the unnamed man wrote that they once had a conversation about celebrity crushes and people they would sleep with as a ‘hall pass’. That’s when his 37-year-old wife revealed that she had a long-term crush on American comedian Jason Mantzoukas. They apparently attended the same university in Vermont.

Curious to know how much his wife was into the comedian, the 36-year-old husband made a fake email address in the name of Jason Mantzoukas and started flirting with her.

However, their conversation soon took a sexy turn and his wife started sending him nudes. This was after he’d sent her “headless nudes of some hairy looking guy”. 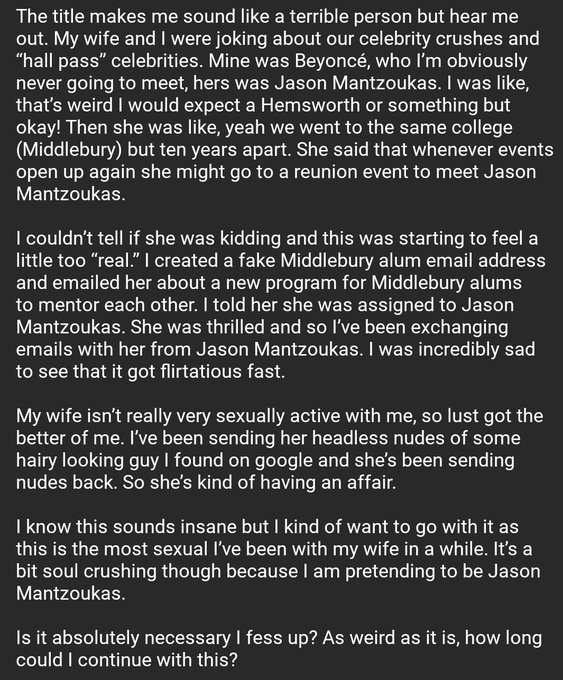 Even though he was appalled by his wife’s actions, he didn’t want to end their fake conversation because that’s the most sexual he’s been with his wife in a while.

Hence, he took to social media to seek advice. People were ROFL on his situation. Some even gave him some serious relationship advice.

You've betrayed both your wife and national treasure Jason Mantzoukas

This is, not going to lie here, one of the funniest posts I've seen on this board. I'm imagining Mantzoukas sexting exactly like he talks on the Good Place and that is NOT helping

I don't know what's worse. The Guy for catfishing his own wife. Or the wife for clearly completely wanting to cheat on her husband. (And would've had it not been the husband)

This was just a bad idea all around, and dare I say the Jason Mantzoukas nudes aren't the issue here

I do not like this man, but I also feel bad for him? He's clearly not comfortable with hall passes but still agreed to them & now his wife is making a situation where she could see hers. He wants a more sexual relationship w/ her but she's not interested. But he's catfishing her

We’re using the word catfishing. But let’s be real.

If you are deceiving somebody to get them into a sexual relationship with you, the sexual activity they engage in with you isn’t fully consensual.

This is a pretty serious violation.

Am I the only one who thinks she knows it's her husband? Mentor program? Right after she's had this conversation with him?? Also, I'm with everyone who says Jason Mantzoukas doesn't deserve to be part of this mess.

Well, his awkward situation looks like a perfect Bollywood masala movie if the script of ‘Rab Ne Bana Di Jodi’ got a sensual twist. What do you think of his predicament?