Husband Slammed For Glorifying Wife Taking Care Of Baby, House & Work, But She Defends Him

In Bengali, there is a word we tend to use while describing women – doshobhuja or the one with ten hands. We say this while praising women for doing everything at once like taking care of the house, children, work, etc. But is this fair for women?

Many people online have been asking the same question after a man posted a picture of his wife cradling their child while sending a work email. The man praised his wife for taking care of the kids, their food, health, her work, and much more “at the same time”.

He added that as a man, he is astonished to see his wife multitask. Have a look at his full post here: 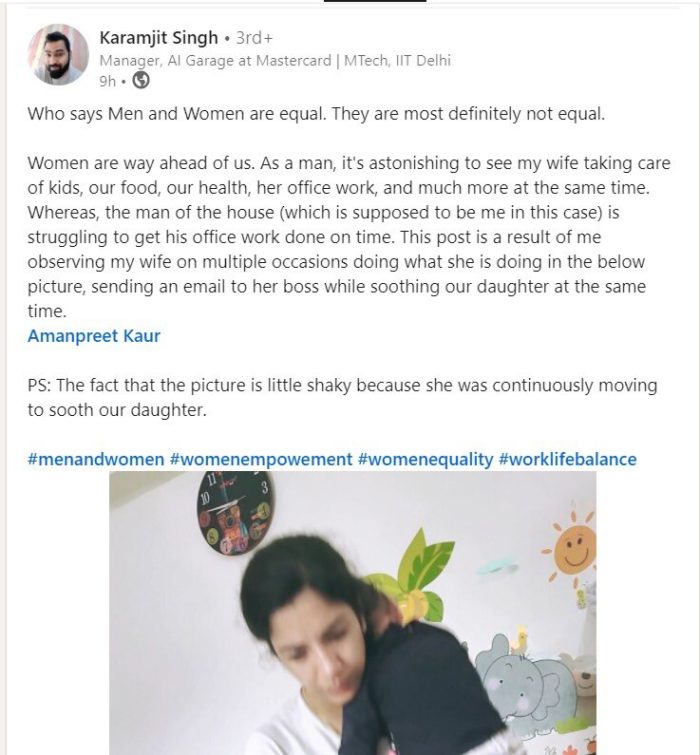 As his post went viral, many slammed the husband for glorifying his wife for juggling work and childcare instead of giving her a hand and reducing her load.

Men will literally do everything but actually help the women in their lives pic.twitter.com/4BSFvIxh3H

So many husbands are like this and their mothers are absolutely responsible for this behaviour because they teach them to be like this while expecting dil to do all the work. Here the father assumes mother is the only one who should care for child, he has no responsibility

This is smart way of getting out from doing parental duties, just heap praises on the wife, most women are just happy to be acknowledged as they have seen far worse around them.

Stop. Glorifying. Sexist. Roles! Maybe help her out instead of clicking that picture. Why is that so hard to comprehend

I personally know some men who speak eloquently about women empowerment and unfair treatments they face, then go home and wait in the dining room until wife serves the food kept on the table. The irony.

This post is the exact same energy as the men who were coming on here every day praising their mums during Ramadan but never actually helping lmao https://t.co/RKudzvjW6d

might as well live alone if my husband only does compliments like these instead of helping 😐 https://t.co/hcZG9CT1po

they will go our of their ways to compliment and praise their wives for being an absolute angel yet does nothing to ease the burden https://t.co/2YLab4jbiX

On the other hand, there were some who suggested not to draw conclusions based on one post. They highlighted that in real life, the husband and wife may actually distribute work equally.

You might be too quick to judge i think. Have seen both genders doing wonderful things and not so wonderful things. Generalization does not help anyone. Photo might not paint the whole picture.

can we also think that she is able to work because both of them helping each other since their mrg and kid needs only mother (sometimes they ask for their mother noone else) , we don’t have to judge that man for appreciating his wife, this world is really cruel 🙏

I person appreciating his wife as much would surely be helping as well. Mentioning himself here would be belittling what Indian wife has to go through.

He’s celebrating his wife’s awesomeness. I love that!

Yes, there are men who are the category you described perfectly. I know more than a few! But don’t think there is enough context for us to jump to quick conclusions about him.

As the husband continued to face backlash online, the wife commented on the post and revealed how they share their responsibilities.

“He is a man who shares all household responsibilities and still believes his wife is better than him,” she writes. 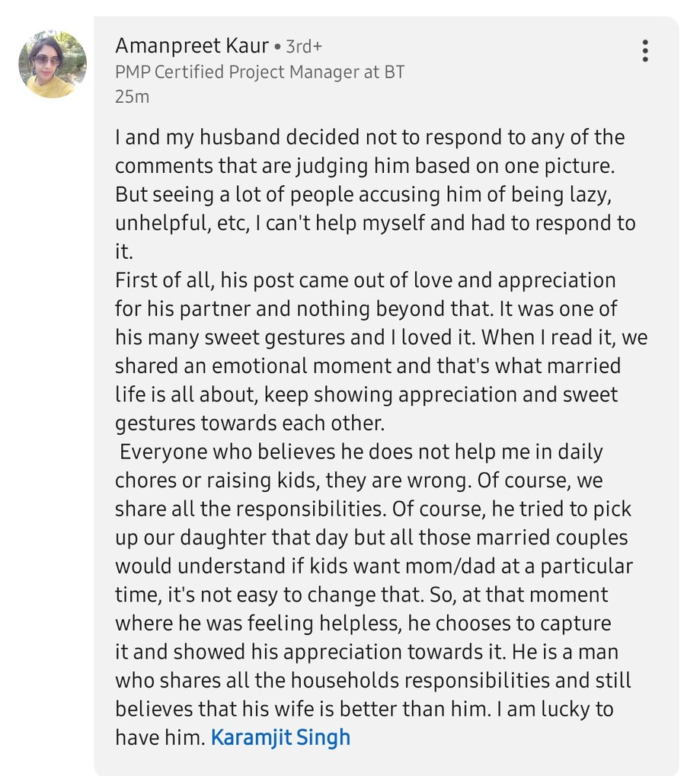 Social media does not always show the whole truth. At least that’s one thing we can take away from this incident!