Just a few days back, in a heinous video shared online, a man threw a dog in a lake. And, while such shameful acts boil your blood, there are other kind instances that restore your faith in humanity. Like, recently, a home guard from Telangana risked his own life to save a dog that was being washed away in an overflowing rivulet.

In a video shared online, Mujeeb Rehman can be seen stepping into an overflowing stream in Nagarkurnool to rescue a dog stuck in the bushes, reports the Indian Express. The incident occurred when senior police officials deputed Mujeeb and other police personnel to caution people against getting into the water as it would pose a danger.

However, when they were there, the guard noticed the palpably frightened dog. And, despite the risk involved, he decided to rescue the canine. Mujeeb strongly held onto a JCB excavator while attempting to reach the dog in the fast-flowing river stream.

Mr. Mujeeb #HomeGaurdOfficer #NagarkurnoolPoliceStation risked his life to save a dog from a stream – #TelanganaRains2020.
A caring concern for every living creature of the ecosystem.
VC: @NewsMeter_In pic.twitter.com/tJmU9aA5lK

The 36-year-old was quoted saying by TOI,

“It happened right in front of my eyes. I saw the dog getting washed away in the flow. It then got stuck in some shrubs. I did not have to think twice about what to do. I got into the water, balanced myself, and rescued the dog.”

Thankfully, he was able to grab on to the canine and bring it to safety as people nearby started cheering for him. According to locals, the dog slipped and fell into one of the rivulets located on the outskirts of Nagarkurnool. 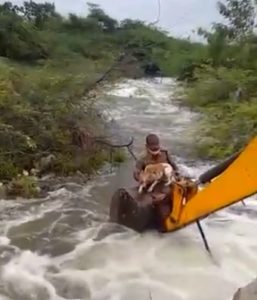 The guard is now being hailed as a hero by many people online:

He must be awarded with the best he deserves. This tweet by @TelanganaDGP will definitely encourage more people to help respective living creatures, but the man who risked should be given prominent post in the department too.

Excellent…every one must respect all creature on the earth.

Salute to the jawan🙌

Wow 🤩 pure humanity..couple of days back I have seen a video someone throwing a dog in a water from bridge(Shame) and here this man saving a dog from the overflowing water.. wat a different faces of human and humanity. Hats off to this gentleman @TelanganaDGP

In case you are wondering, the dog was then left in Endabetta village were it was often seen before. Kudos to the homeguard for his selfless act. We need more people like him in this world.