Akshay Kumar, Sunil Shetty, Paresh Rawal, and Tabu starrer movie ‘Hera Pheri’ is among those entertainment-packed comedy movies that one can’t be tired of watching. Every time I watch this 2000s movie, I have a gala time laughing out loud. The movie was just the first installment of the ‘Hera Pheri’ franchise. 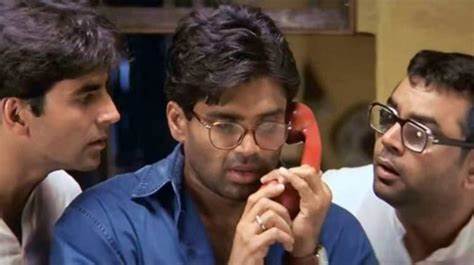 In 2006, ‘Phir Hera Pheri’ was released with the three male actors reprising their characters from the previous film. Well, if you never get tired of watching these comedy films then you are in for a surprise.

Producer Firoz Nadiadwala recently testified that the third installment of the iconic comedy-drama, ‘Heri Pheri 3’, is currently under work. He also confirmed that the same cast would star in the film, reported The Indian Express.

“You’ll get to see it very soon with the same star cast – Akshay Ji, Paresh Bhai, and Suniel Ji. The story is in place, and we are working on certain modalities. It’ll be made in the same way, retaining the innocence of the characters.”

“We can’t take past achievements for granted. So, we have to be extra careful in terms of our content, story, screenplay, characters, mannerisms, etc. We are in talks. We’ll make the announcement soon,” Nadiadwala was quoted as saying.

As soon as people came to know about this happy development, they celebrated it with ‘Hera Pheri’ memes. Take a look at some of them here:

Most Thrilled ending in the History of Indian Cinema..#HeraPheri3 pic.twitter.com/ZgZxBd6V0S

We are getting Hera Pheri 3? The iconic trio is coming back…OMGGGGG pic.twitter.com/6Dmn3ElUMS

#HeraPheri3
Really this masterpiece will be created?

Awaited to watch this trio! ✨

After waiting for many years!

Me to those ..who r thinking that movie is coming: pic.twitter.com/ScvpIbEf3q

Are you excited? Because we are!