There is a special place in hell for people who want to separate from their partners just because they are suffering from an illness and are not attractive anymore. If physical attraction means so much to someone, then maybe they shouldn’t get married at all because looks fade. It is love that remains.

I say this because I came across a shocking confession on Twitter. A woman shared a screenshot of a Reddit post wherein a man claimed he wanted a divorce from his wife as she isn’t attractive anymore. The wife has cancer, is undergoing chemotherapy and so is bald, and has had a mastectomy (surgery to remove all breast tissue to prevent breast cancer).

“I always thought I loved my wife. She is the sweetest, kindest person I know and she’s done so much for me. But I’m just not attracted to her anymore. I know she knows because we haven’t had sex in two months and I can see the pain in her eyes,” he wrote.

“I hate to say this but she disgusts me now. I just want her to understand that it isn’t because she is a bad person, it’s just that as a man I want someone I am attracted to.” 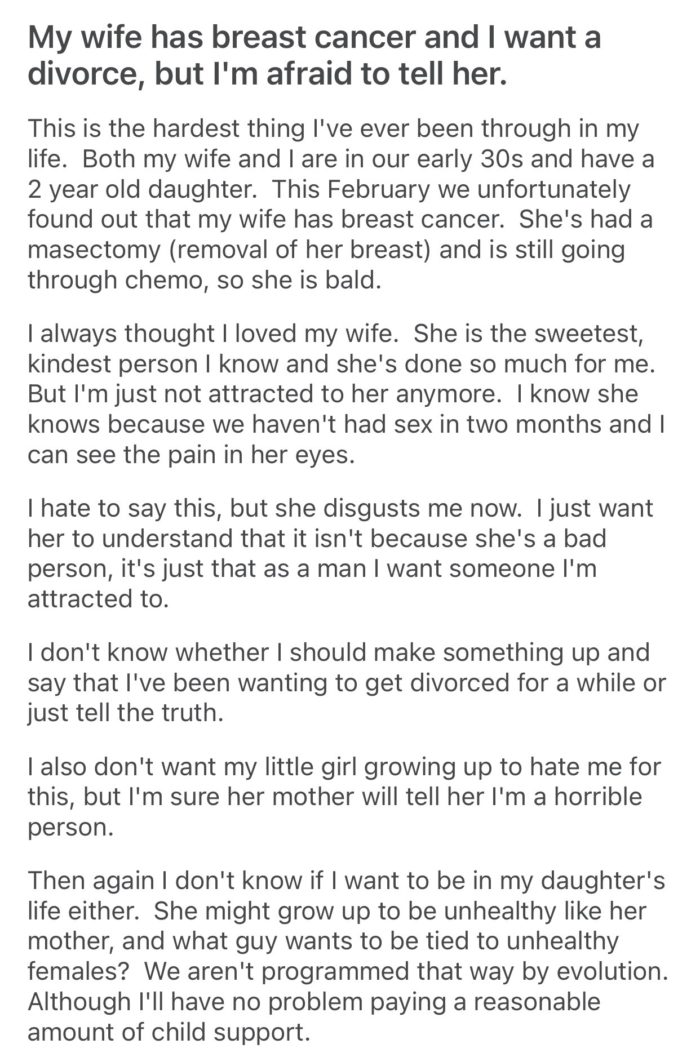 Even though this post has gone viral now, we did some digging and found that this was actually posted on Reddit 10 years ago. But the idea that people with such mindsets exist is repelling, to say the least.

Several people online expressed that they would rather stay alone forever than get married to a person like this. Have a look:

marrying someone like this is literally my worst nightmare pic.twitter.com/l9E1meatMc

Wife: gets cancer
Husband: this is the hardest thing I’ve ever been through in my whole life

Ohh God! He literally said she disgusts him. I feel so bad for the lady and her baby. It would be so heartbreaking for them to know the thoughts of this man. What does it take for them to have a warm heart.

The fact he is ready to abandon his own daughter incase she becomes unhealthy too.. my goodness cannot wrap my head around this

There are many people who cant handle when their s/o is going through a difficult time like some illness or pregnancy or poverty. They wanna jump ships as soon as possible.

My worst nightmare is not even the marriage but creating a little human with a psychopath like this. Imagine seeing your baby disappointed because their father is a disgrace? I don’t know if I could take that.

He never loved her and his daughter won’t need anyone else to tell her what absolute garbage he is. She’s going to be better off without him.

The world is filled with evil-minded people.