Speaking of which, a guy named Pushpak Sen recently took to social media to share a powerful and a much-needed message. His 54-year-old mother had been slut-shamed by their close relatives for wearing red lipstick at a family gathering. The next day, in response to their hostile behavior, Pushpak wore red lipstick and sent a picture of himself to his relatives writing, “Good morning. Get well soon.”

“My mother, a woman of 54 years, got slut-shamed by some of our nearest relatives for wearing red lipstick at a family get-together. So yesterday, I sent all of them this picture with a ‘Good morning. Get well soon.’ message,” he writes.

Pushpak goes on to add, “What baffled me the most is that some of these relatives have children, who are super ‘woke’ on social media and were present when this ‘gossip’ was happening but didn’t say a word.”

He then takes a stand for everyone who has had to suppress their desires for a toxic society.

“Here I am, a man with a full face of beard and red lipstick. Here I am, standing up for all the mothers, sisters, daughters, non-males and all the womxn who have had to suppress their desires because of the toxicity of an insecure society. Here I am, standing up for all of them and asking my fellow brothers to stand up for the womxn you know, in your own way, when you see your loved ones getting bullied.”

My mother, a woman of 54 years, got slutshamed, by some of our nearest relatives, for wearing a red lipstick at a family…

As his post went viral, people online lauded Pushpak for giving a befitting reply to his relatives. Many showered him with messages of support. Have a look: 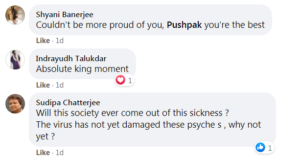 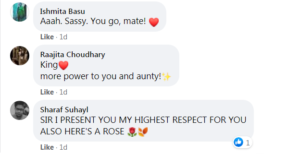 Change begins at home. If we want to change the way society thinks, we must first stand up against members of our family when they show problematic behavior. Sometimes, that’s the most difficult thing to do. We hope Pushpak inspires many more to do the same!