Guy Asks If He’s Wrong To Ask His Wife To Take Up A Job As He Doesn’t Earn Enough, Gets Advice

Over the decades, ‘Feminism’ has had new meanings. It started with women’s fight to gain an education and inherit part of their father’s fortune and then evolved into the fight for voting rights, reproductive rights, gender pay parity, etc. Nowadays, a lot of focus has been put on ‘choice’ – respecting a woman’s choice, be it sexual, educational, professional, or personal.

Here’s a story. One guy took to Reddit’s subreddit r/india to share that his girlfriend of 6 years, whom he is planning to get married to, wants to remain a housewife and not take up a job. He, on the other hand, wants her to work so that both their salaries can help them and their family live a comfortable life.

The guy feels that he doesn’t earn enough to financially take care of the entire family and lead a nice lifestyle. He has tried explaining things to her but she still doesn’t want to work.

“I feel a bit uneasy as I don’t feel I earn enough to have a nice lifestyle for a complete family if I’m the only one bringing the money. All my life I’ve compromised financially and finally I’m at a point where I don’t have to and I don’t want to let go of this freedom. I love her and I’ve explained it all to her. She says that she understands my predicament but she still won’t work because she doesn’t want to learn new things and go out of her comfort zone,” he wrote.

He asked people on Reddit if he is wrong to expect his wife to work and sought advice on what to do next. Here’s a look at the full post. 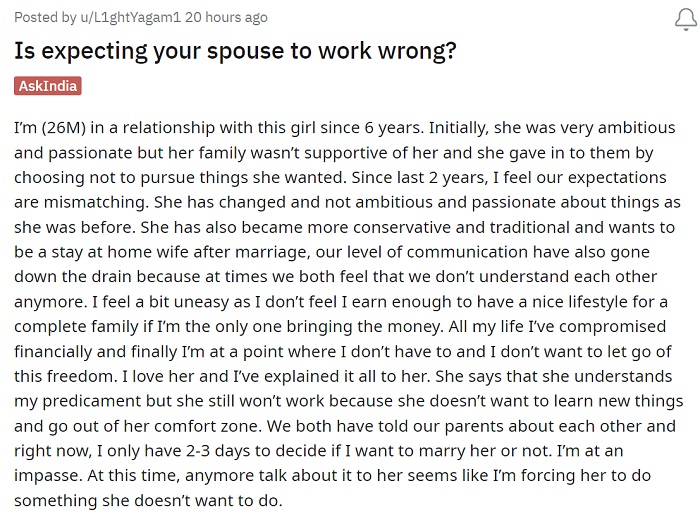 There were several reactions to the post, many of which properly explained to the guy his choices and the kind of repercussions they entail. Some highlighted that while the woman isn’t wrong to want to remain a stay-at-home wife, his contrasting needs lead to a clash of interests – something that will cause a lot of trouble in their marriage. 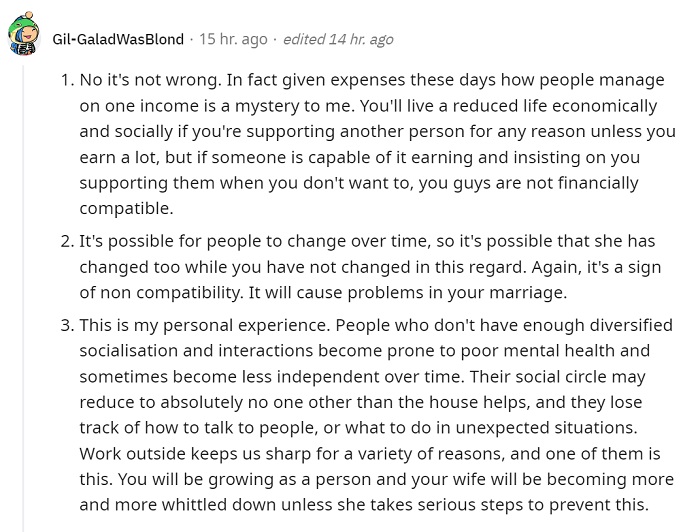 For a marriage to truly work, both the partners’ basic thoughts and desires need to align.
Do you want kids?
Where do you stand on savings?
Do you want to live separately or with the family?
I work long hours and might have to travel for work frequently. Will that be a problem?

It’s questions like these that need to be answered before making things official. Honestly, in today’s age, both the husband and wife need to have a job because look how expensive everything is! Don’t you think?