Gucci Gets Trolled By The Internet For Selling Dirty Sneakers For A Whopping ₹65,000

David Fincher’s ‘Fight Club’ came out in 1999 and if you ask anyone whether it’s there in their list of ‘all-time best movies’, they’re going to say “yes!”. However, the thing is that I don’t think that anybody really took in the message against consumerism that it was professing. Because if they did, a brand like Gucci wouldn’t have been selling dirty sneakers for exorbitant prices.

According to the official website of Gucci, they’re selling what’s being called Screener sneakers, which is basically a pair of worn-out, soiled shoes. The official description for it says,

“A pastiche of different influences that span across decades, the Cruise 2019 collection references old school shapes and materials inspired by vintage sportswear. Influenced by classic trainers from the ’70s, the Screener sneakers—named for the defensive sports move—feature the Web stripe on the side and vintage Gucci logo, treated for an allover distressed effect.”

Okay, now take a look at one of them. 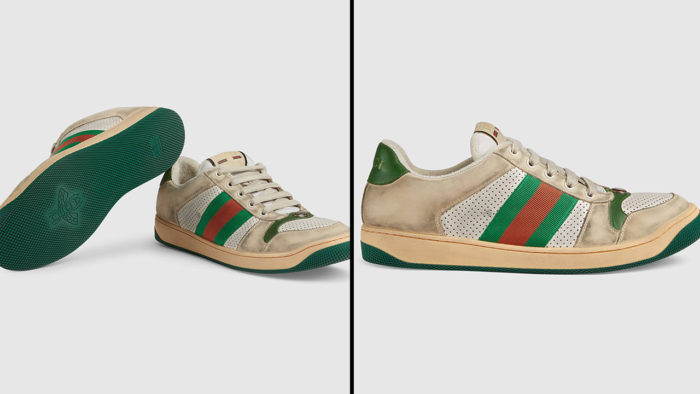 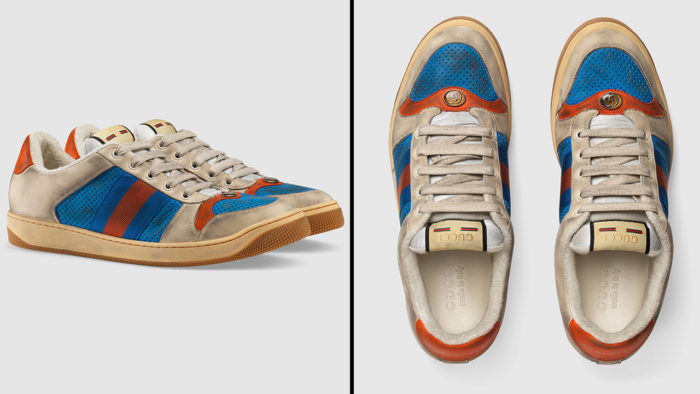 What do you make of these "dirty" trainers Gucci are selling for a mere £615? Bargain, right?! 🤔 #jeremyvine pic.twitter.com/ONqNUxgl7T

I've said it before and I'll say it again, some folk have more brass than sense!

I’m sure these fashion designers do ridiculously styled things for publicity. Anyone stupid enough to buy them needs to seek out a good Psychologist.

Are you sure this isn't a social experiment for the "new" money witless spenders? What's next, ready worn knickers, used toothbrushes? As long as they have that all important label!

Seriously?!? I mean if someone will pay me $20 – I can go buy you some shoes and dirty them up. I’ll even write @gucci on them. I would like to know who would actually wear these!! pic.twitter.com/SwfV700cRA

I don’t know whether to laugh or burn everything tbh https://t.co/PMve5JItPk

I think I had a pair of trainers like these out of Dunnes Stores in the late 80s https://t.co/RrrPoZn2HI

I usually throw my trainers away when they look like this https://t.co/Krf2rxoVdV

So, if you get the chance, are you going to buy these Gucci sneakers? And if so, please let us know why in the comments.