Home Entertainment 16 Times Govinda Killed It With His Expressions

Govinda. He’s the Hero No 1 that entices Haseenas and gives your movies a Happy Ending with a touch of Naseeb bestowed by the Movie Critric Gods. He’s given us some great hits and also some kickass expressions. Govinda is the one person who has an expression for EVERYTHING. Don’t believe it?

Well, we have some proof.

1. When he believes in oral hygiene. 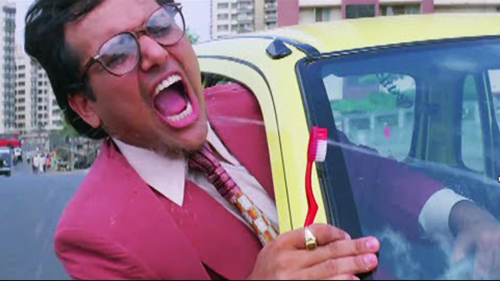 3. When all he really wants to do is Twerk all day.

4. When he trying to spot some boobs but failing miserably

5. When he’s made ‘Talk to the Hand’ a part of his daily Zumba routine.

6.  When he’s trying to shoot a bird but shoots his eye instead.

8. When he’s trying hard to play Cyclops but fails.

9. No, Govinda doesn’t need a washing machine, he makes his own rain.

11. When he faces an identity crisis

14. When he’s arguing with customer care about his never ending mobile bill, since the time he’s started asking all the chicks in town ‘What is mobile number’.

15. When he saw the reviews for Happy Ending.

16. When he knows we love him anyway!