Did You Spot The Starbucks Cup In Game of Thrones S8E04? Twitter Reacts To Goof-Up With Hilarious Memes!

You know how fans, while watching a particular show that they like, tend to study even the tiniest details while looking for easter eggs? Well, turns out this time GOT fans have found gold! Game of Thrones S8E04 came with its own set of disappointments and fans have already poured a lot of anger on to it. The dinner scene particularly was unlike anything the first ever dinner scene which we saw at the beginning of the show had. With Wildlings surrounding Jon Snow and boasting about how it takes a King to ride a Dragon with Danaerys sitting right next to him did make fan’s blood boil. 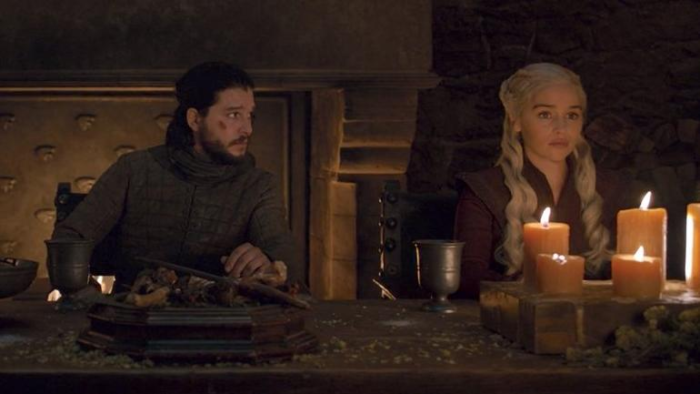 But a particular GOT fanatic took on Instagram to point out an out-of-the-blue detail which is making everyone go ROLF. Here’s what happened.

Image from Episode 4, Season 8. Did we just see a Starbucks cup in the latest episode?!😂

While most of us didn’t notice this at first glance, people went back to watching the scene again. And there it was, a Starbucks coffee for the Dragon Queen!

As expected, Netizens had a good laugh and behold! Thus started a meme-fest.

my favorite show in the entire world forgot a STARBUCKS COFFEE CUP ON THE TABLE WHILE FILMING pic.twitter.com/60z3pOCfg9

I thought this might be a joke to make us all rewatch that scene, but nope, it’s real. I took a picture too. It’s at 17:49 and it’s a pretty unmistakable coffee cup. https://t.co/uc8I0zoXiL

You're telling me they had TWO YEARS to put together a decent show and they couldn't even spot the goddamn Starbucks cup in Winterfell??!?! #GameOfThrones pic.twitter.com/8opg7nyydv

Starbucks marketing team after that FAIL by #GameofThrones pic.twitter.com/Uw6NBXJvEP

Starbucks executives after seeing all the free publicity they are getting after that game of thrones episode. #GameOfThrones

You might be having a rough Monday, but at least you weren't the person who left a Starbucks cup in Game of Thrones pic.twitter.com/GgP1Knz8uV

That Starbucks Cup in Game of Thrones was not a mistake, just wait until the last episode: pic.twitter.com/VS34GKrfbq

guys this starbucks coffee fiasco isn't nearly as bad as the time Jaime had both his hands AND was holding a coffee a couple seasons ago #GameofThrones #DemThrones pic.twitter.com/FKaPVslxvO

I think I found who left the Starbucks cup on the table!!! #GameofThrones pic.twitter.com/ulXUvDCF1A

Even David and Dan were in the episode!

…Even worse: the GAME OF THRONES showrunners were actully *in* that infamous scene with the STARBUCKS Coffee Cup! https://t.co/MlkyrfquI1 pic.twitter.com/qIbo6QYIU4

While the production team definitely felt a massive blow, the showrunners were quick to join the laugh as well!

The latte that appeared in the episode was a mistake. #Daenerys had ordered an herbal tea. pic.twitter.com/ypowxGgQRl

Even Winterfell needs some coffee after the Great War, people!