SS Rajamouli’s ‘RRR’ has garnered a massive fan following not just in India but across the world. Several international filmmakers and actors have lauded the film for being such a remarkable watch. Considering the ever-growing popularity of the film globally, fans expected that ‘RRR’ would be selected to represent India in the Oscars’ ‘Best International Feature’ category.

But that’s not the case. According to Variety, the Film Federation of India has chosen Pan Nalin’s “Last Film Show” to represent the country at the upcoming 95th Academy Awards and not ‘RRR’. 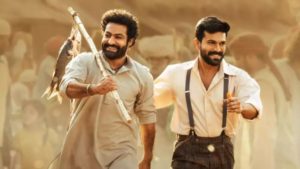 This news didn’t sit well with film critics, film reviewers, and fans alike who claimed that ‘RRR’ could have been India’s one shot at the Oscars and that the FFI made a grave mistake by not proposing the film to represent our country.

Not proposing #RRR for India’s official entry at Oscars is a historical mistake. To compete globally, one needs a global outlook. Old bureaucratic mindset is holding India back. This is unfortunate!

No #RRR at the Oscars for international feature. India, for the second time in recent memory, has chosen another film over the one they probably could have won with. The first was them not choosing THE LUNCHBOX.

Gujarati film #ChhelloShow is India's official entry for Oscars 2023 and as always India has ZERO chance of getting nominated forget about winning. #RRR was our BEST BET in last 2 decades to win an oscar for India. Really Sad to see Film federation of India ignored this fact 👎🏻.

We genuinely had a chance of "scoring big" at OSCARS given the GLOBAL popularity of #RRR. Heart-breaking to see, a film that celebrates Indian Cinema for what it is, not getting recognized by some jury members, who endorse art cinema. #SSRajamouli #JrNTR #RamCharan

Not even in my wildest dreams could I have imagined Film Federation of India ignoring #RRR for India’s official entry to the Oscars. One year when we stood a good chance with it. Moreover, wasn’t #ChhelloShow in contention last year? Didn’t one of the members rip it apart?

Ramcharan's 'RRR' should have been considered for Oscars 2023.
One of the best movie I've watched in recent times.

There’s absolutely no legitimate reason that RRR shouldn’t be nominated for 2023 Best Picture, full stop. If the show doesn’t open with “Naatu Naatu,” what is the Academy even doing? https://t.co/K2JHJpWESI

we genuinely had a chance to win or be given at-least a recognition at the oscars with #RRR but ofc, the jury had to fck it up like they have been since the beginning https://t.co/S5pRsi8QpR

No disrespect to the other movie which I haven’t seen, but not submitting RRR for best international feature is crazy https://t.co/6XdwpXT57W

I don't know why are we even making such a fuss about India's Oscar nominee. We never send award winning movies rather we send some "art" movies. We don't learn from our mistake. #RRR https://t.co/r8qaustidR

It is absolutely ridiculous and frustrating to know that a gem like #RRR has not been sent to #Oscars2023. I mean 😑 the brilliance of @ssrajamouli and spectacle by @AlwaysRamCharan #JrNTR should be upheld. @TheAcademy really needs to consider it.#RRRForOscars https://t.co/7OhjJ2TcI5

However, the US distributor of ‘RRR’ has chosen to launch a “full awards campaign” for the film. They are also calling on the 10,000 Academy members to consider voting for the film in all categories, reported Variety.

What are your views on this?