Parenting is not an easy task to master and for a father, it is no less than a mountain to climb. We have seen several videos of fathers struggling to manage their babies making them hilarious to watch. Remember the clip where a father drew fake eyes to keep his child asleep?

And now, we have another video where a Chinese father found a brilliant way to make his girl complete her homework.

In a bid to keep a strict eye on the girl, the father has trained their pet dog for the work. The video going viral shows the adorable canine looking on with his paws on the table as the kid does her homework! According to Indian Express, he has been training the dog since it was a puppy.

It is believed that the girl has a habit of staying glued to her smartphones and playing games. Therefore, the helpless father took the help of his most reliable weapon, his doggo! 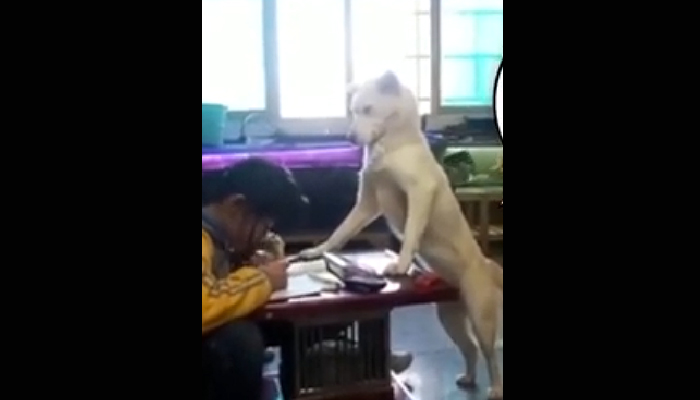 Check out the videos:

The father was quoted saying,

“I pointed at the coffee table and told it to watch my daughter as she does her homework. It would then guard her and make sure she doesn’t reach for her phone.”

Wow. Both the father and the dog deserve a medal each!