At the moment, the situation in flood-hit Kerala just seems to worsen. Lakhs of people have lost their homes and property and have taken shelter in relief camps. People from all across the nation are contributing their bit in providing aid to the flood victims.

Recently, a roadside garment vendor donated his entire textile stock to help the flood victims on the occasion of Eid. In another selfless act of generosity, a father, Anas Asna, who is a native of Adoor town in Pathanamthitta has come forward to make his noble contribution.

Asna’s son suffers from cancer and the father had been collecting money for years for his treatment. His son was to be admitted at the Regional Cancer Centre for further treatment this week.

But rather than admitting his son to the hospital, Asna decided to donate all the money he had collected to aid flood victims in Kerala.

“My son is getting admitted at the RCC again this coming Friday. My family is facing a financial crisis, but it is nothing when compared to the suffering of those who have lost everything in the deluge. So we have decided to donate the amount we had saved for his treatment to the Chief Minister’s Disaster Relief Fund (CMDRF). Our Kerala will overcome this crisis.” 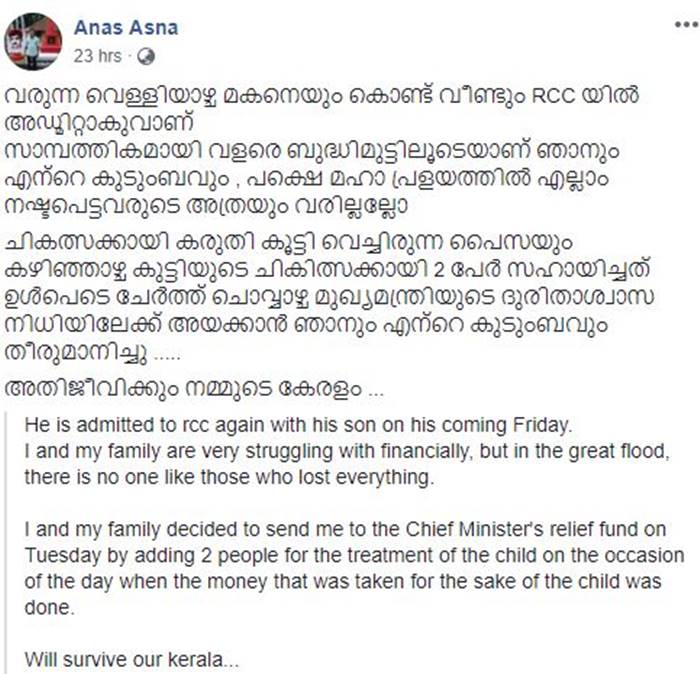 His post soon amassed reactions on social media. Some lauded his spirit while others volunteered to help him and contribute funds for his son’s treatment. Then there were those who said that they would try and bring the matter to health minister KK Shailaja’s attention.

The heart-warming gesture by Anas Asna surely deserves all the appreciation. He has certainly inspired and encouraged many to do their bit in helping the flood victims and their families.