Fashion Designers Boycott Kangana Ranaut After Twitter Suspension, Vow To Not Work With Her

Too many things happened yesterday. Bill and Melinda Gates announced their divorce, the IPL got suspended, and of course, Kangana Ranaut’s Twitter account was permanently suspended for “hateful conduct and abusive behavior”, reports NDTV.

However, after her Twitter suspension, Kangana was also boycotted by a few fashion designers who vowed never to associate with her again. According to TOI, the designers who decided on this step were Rimzim Dadu and Anand Bhushan.

Anand Bhushan posted a statement on Twitter that read:

“In view of certain events today, we have taken a decision to remove all collaboration images with Kangana Ranaut from our social media channels. We also pledge never to be associated with her in any capacity in the future. We as a brand do not support hate speech.”

Do the right thing. pic.twitter.com/p72a7zqFz9

“Never too late to do the right thing! We are removing all posts of past collaborations with Kangana Ranaut from our social channels and pledge to not engage in any future association with her.”

Responding to Anand Bhushan’s statement, Rangoli Chandel, Kangana’s manager and sister, took to Instagram Stories to deny ever being associated with his brand. Here’s what she said: 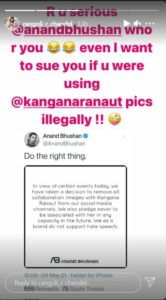 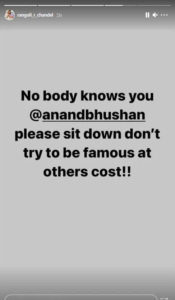 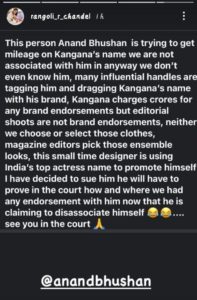 Anand Bhushan responded to Rangoli, shared a fashion magazine cover, and claimed that he’s the designer whose outfits the sister duo is wearing on the cover. 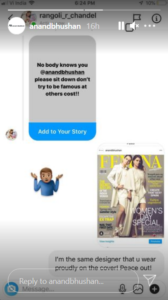