10 Deadly Ancient Weapons, Thankfully Not In Use Anymore

The world has always bled, the only difference is that today it is being bombed, and ages ago, it was sliced and torn apart. The history of wars speaks: The hunger for power has raised warriors, and the thirst for power of warriors has designed weapons. Today, we have ‘docile-on-the-outside-killer-on-the-inside’ kind of bombs, that time we had visibly dangerous and crafty swords and pistols, like the 10 below.

1. Gauntlet Dagger- Also known as ‘punching dagger’, it is an invention by the WWI soldiers

World War I involved a lot of trench warfare (a type of combat in which opposing troops fight from trenches facing each other). And in order to be able to fight on close proximities effectively, soldiers invented makeshift lethal weapons, such as the Gauntlet Daggers. The dagger has a rough armour for the forearm and a knife protruding out of the fist.

2. Key Guns: For the jailers who had to control rowdy prisoners

Keeping a check on prisoners of high criminal instincts meant that life of a jailer was never risk-free. Holding the weapon and managing to open the cell door at the same time could easily give the rowdies immense opportunities to either attack or flee. As a solution to this, blacksmiths came up with the idea of Key Guns. They were basically keys to the cell doors, with single-shot pistol installed within them.

However, the trigger to the gun was either around or on the key handle itself, which meant the jailers had to be extra careful while opening the cell doors.

3. The Enouy Revolver: The revolver that could hold 48 bullets in its cylinder

4. The Duck’s Foot Pistol: When accuracy wasn’t a prime concern

Another weirdly fascinating piece of weaponry, the Duck’s Foot Pistol (named so because of its design) was made in order to attack large groups on close quarters. The demerit (and a major one), however, was that none of the four barrels of the pistol point straight ahead. And therefore, the pistol was dangerous, but definitely not for the aim.

The pistol was popular among bank guards, prison wardens and sea captains in the early 19th century.

5. Obsidian Knives: The sharpest ever

Obsidian knives are among the sharpest blades (made from naturally occurring volcanic glass) in history. So sharp, that an ancient Aztec weapon called macuahuitl, which has Obsidian embedded in its edges, possesses the ability to chop off a horse’s head in one go.

The knives made of this blade were commonly used by the indigenous peoples of North and South America.

6. Goedendag: A nightmare for the knights

The weapon was used in the 14th century, notably during the Franco-Flemish War. It was essentially a wooden staff at least 5 feet long with a wide one end, that sported a sharp metal spike. In the Battle of the Golden Spurs, as many as 500 French knights lost their lives to Goedendag.

The term Goedendag is dutch for ‘Good Day’, and the inspiration for such a weird name for a weapon goes- During the Bruges Matins massacre in 1302, the Bruges would throng the city, greeting everyone. And those who answered in French accent were murdered right away.

During World War II, Japanese wanted to cause mayhem on the American mainland, but considering the not-so-advanced technology of that era, there was no plane that could fly across the entire Pacific. Also, the American naval officers, of course, didn’t let the Japanese aircraft come anywhere close.

The genius inventors that the Japanese have always been, invented the Fu-Go (balloon bombs) to solve this issue. They harnessed air currents to develop these bombs, which are also the world’s first intercontinental weapons.

The silent killers of WWII, these bombs through jet streams, would travel soundlessly across the Pacific ocean to reach their spots in North America.

8. Pata: The weapon of the Maratha warriors 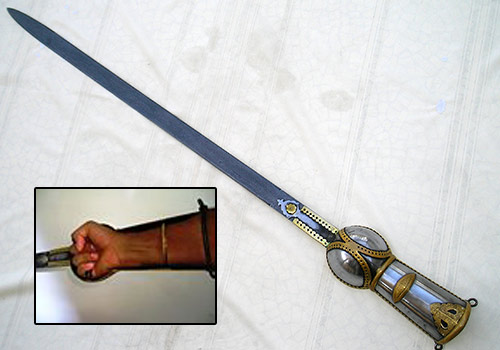 The Maratha warriors were traditionally trained to combat with two Pata, holding one in each hand. Another way of using the weapon was, Pata in one hand and belt, javelin, or axe in the other hand. Owing to the thrusting power of the sword, it was a favourite to the cavalry soldiers (soldiers who fought riding horses).

One of the best assortment of Pata is exhibited at the Durbar Hall, Shiva Nivas Palace, at Udaipur (Rajasthan).

9. Lantern Shields: To blind the enemy

As per the historical documents, the danger quotient of this weapon was high in a clever manner, thanks to its feature of a secret weapon enclosed within the body of the shield. The secret weapon was a ‘lit lantern’. A small leather flap on the shield surface when lifted, let loose the blinding light from the lantern hiding inside, thus leaving the opponent dazzled and confused. Sometimes, the fencers carried the lantern shields to blind the opponents.

10. The Man Catcher: This deadly weapon was used to catch the enemy on horseback by his neck

This deadly device was immensely used during the wars of the 1500s. It was essentially useful to fight the enemies on horseback because otherwise it was difficult to attack them in one solid blow.

Consisting of spikes on the inside of the hoop, the Man Catcher could easily catch hold of the enemy by his neck, thereby aiding in pulling him off of the horse in one go. The weapon made the process of attacking and killing pretty easy during the wars. Also, these were used to capture important (noble) enemies in such a way that they stayed alive.

The weapon remained in use in Europe till at least the 18th century.