Here’s what happened. On November 13 at 11:30 PM, Elon Musk tweeted an apology for Twitter being “super slow in many countries” and that the “app is doing >1000 poorly”.

Btw, I’d like to apologize for Twitter being super slow in many countries. App is doing >1000 poorly batched RPCs just to render a home timeline!

A couple of hours later, on November 14 at 2:44 AM, Eric Frohnhoefer argued Musk’s claims and tweeted “this is wrong”.

I have spent ~6yrs working on Twitter for Android and can say this is wrong. https://t.co/sh30ZxpD0N

After this, Elon Musk and Eric got into an online disagreement followed by an argument.

We have done a bunch of work to improve performance and we found that it correlates well with increasing UAM and Ad spend. Agree, there is plenty of room for performance improvements on Android. However, I don’t think the number of requests is the primary issue.

To this online exchange, many people were of the opinion that correcting your boss on a public forum is unprofessional behavior and asked Elon to fire him.

Fire him if he hasn’t been already. This is unacceptable behavior…

Is it weird correcting your boss in a public forum? It’s weird for us.

you don’t criticize or correct your boss in public. 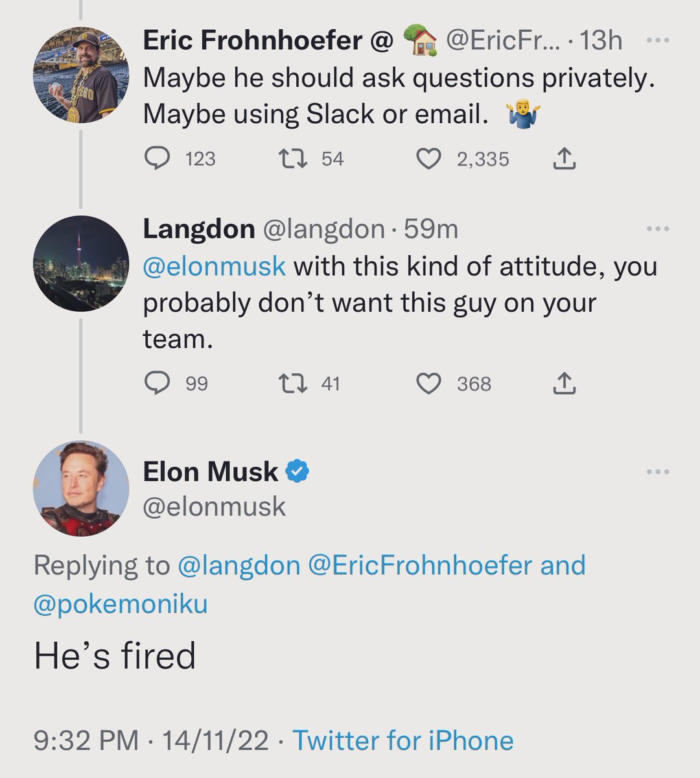 In another tweet, Eric shared a picture of his laptop and claimed that he has lost all access.

Guess it is official now. pic.twitter.com/5SRwotyD8J

In a conversation with Forbes, Eric revealed that he didn’t have a strong opinion regarding Elon Musk right after his acquisition of the company. Instead, he kept his mind open and waited to see what would happen. However, after this, he says that the company has gone “downhill”.

What’s even more astonishing is that Eric claimed he didn’t get any official notification from the company regarding his dismissal.

“No one trusts anyone within the company anymore. How can you function? Employees don’t trust the new management. Management doesn’t trust the employees. How do you think you’re supposed to get anything done? That’s why there’s production freezes – you can’t merge code, you can’t turn things on without permission from VPs,” he said, expressing his concern for the future of Twitter.

Do you think this entire incident was justified? Couldn’t the two have discussed work problems privately? And did Musk really have to fire him over a tweet?

What are your views on this incident? Share with us!