‘Baba ka Dhaba’ has now become a nationwide movement. Foodlovers across the country are taking steps to ensure that their nearby struggling local sellers receive the help they need, just like the elderly couple Kanta Prasad and Badami Devi did. All it took to start this movement was one viral video telling their heartbreaking story.

Another such viral video tells the tragic story of a 70-year-old couple selling tea in Delhi’s Dwarka. Baba and Amma were physically tortured by their alcoholic son and son-in-law and were driven out of their house. The physical assault allegedly left Baba with a fractured arm and a broken back which make him unable to stand straight.

Thanku all luvly people for the support to this dada dadi….it is really painful to see them in this condition…god bless everyone..keep supporting keep helping

A guy named Vishal Sharma recently visited their humble road-side tea stall and listened to their sad ordeal. After getting driven out of their own house, it was their daughter who set up the tea stall for them to help them earn money.

Both couldn’t hold back their tears while speaking to Vishal. Moved by their story, Vishal decided to help the couple. He went on to fill the tea stall with snacks like chips, namkeen, moong daal, biscuits, etc. for the couple to sell. He also bought them tea packets and milk, food essentials, and handed them Rs 10,000 for their expenses.

Vishal also asked his viewers to help in any way they can. Have a look at the video here:

We came to know about 70 year old baba n amma selling tea near Sector-13 Dwarka, Delhi . there condition is very bad right now and baba hand and backbone is fractured . They are currently selling tea and customers are not coming to them.. please help them by any support you can give.. #HELPTHEM #70yearold #foodvloggers

After the video went viral, several people, including celebrities like Mahima Chaudhry and Chitrangada Singh, extended their support.

Many lauded Vishal for his kind deed. Here’s what they said: 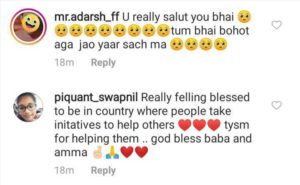 Kudos to Vishal for helping the elderly couple. We hope many others are inspired to do the same for such people!