There are some things that just irritate us to no end. Like bad cellphone reception, patchy connectivity and low signal. Which is why it is a good thing that our cities are getting more and more cellphone towers, right? Well, not quite. Because better mobile networks come at a price – namely the population of birds.

Dhanya R, a researcher at the Salim Ali Centre for Ornithology and Natural History in Coimbatore says, “Cell phones and towers emit a very low frequency of 900 or 1,800 MHz, called microwaves. Studies have found that they can affect thin skulls of chicks and thin eggshells.”

Ranjit Daniels, a zoologist from Chennai further adds, “Birds are known to be sensitive to magnetic radiation. Microwaves can interfere with their sensors and misguide them while navigating and preying.”

According to News18, to raise awareness about this serious issue, the Barisha Club in Kolkata has designed a unique Durga Puja Pandal. It consists of a dish TV antenna and a faux cell phone tower with skeletons of dead birds all around.

West Bengal: A #DurgaPuja pandal has been made in Kolkata to depict the harmful effects of mobile towers' radiation on birds. The Durga idol in the pandal shows birds perched on her hands, instead of the goddess' 10 weapons. (03.10.2019) pic.twitter.com/C2mUtRvJsp 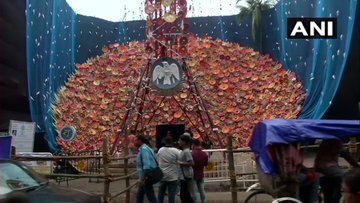 “It is an advantage to have so many mobile towers in the city for communication development but through the concept of this pandal, we want to show the abusive and bad effects of these towers on birds. In the interior, Maa Durga has been depicted as ‘mother nature’ with no weapons and giving the birds shelter in her hands.”

The unique pandal with an environmental message was painstakingly made in three months by 100 workers. The estimated budget was Rs.45 lakhs. And it makes us wonder, do we really need development and growth that comes at the cost of the environment?