You must have heard your teachers say, “When in doubt, ask.” But how many of us ever had the nerve to ask them our queries, or debate with them to hear what we want to?

Well, millennials today have opinions and I’m sure teachers must be having a tough time catering to their queries. This funny and eye-opening exchange between a teacher and a student on a school WhatsApp group is raising a lot of eyeballs.

A Reddit user recently shared multiple screenshots of the argument between a college student and his teacher regarding the “dress code”. The student is seen pitching that their English literature teacher has instructed them not to sport different hairstyles in class. However, several poets and writers of yesteryear used to have weird hairdos.

While the teacher was happy that students weren’t shying away from posing their queries, he responded that back in the day, the poets ‘dressed well’ unlike many kids who turn up to the class in ‘torn, waste cloth type dress’. 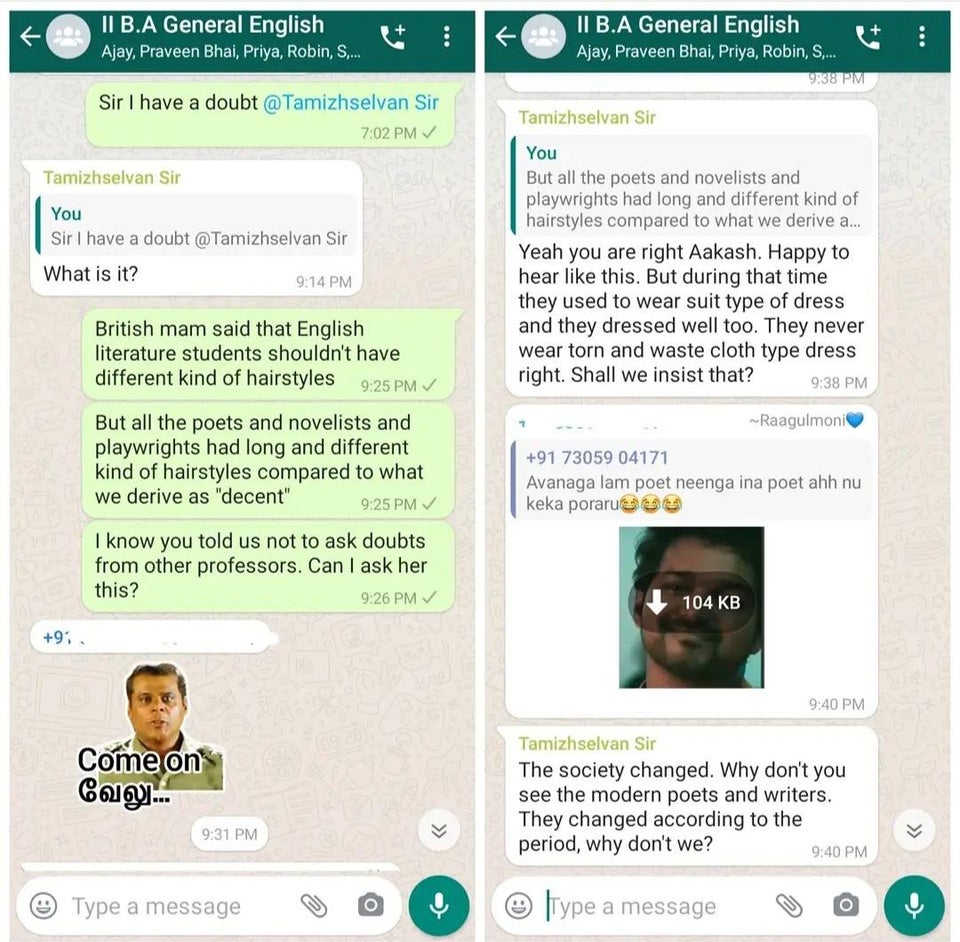 Countering the teacher’s argument, the student said that this came from the jail system. The Britishers never allowed their prisoners to choose what to wear. “So, college is a jail?” he asked.

Without wasting enough time, the teacher says, “If you need freedom, you have two choices. Either get a degree and go or else get a TC and go. The choice is yours.” He further added that when we’re under a system, we need to oblige to the rules and adjust according to the situation to reach our goal.

He then said that even teachers go against their professional ethics to pass a student even if they fail in 7 subjects like the student. “At that time why don’t you say, sir, fail me?” the teacher quipped. The student then insisted that he was simply asking the question, “Why is our hairstyle a problem?” The teacher was quick to respond that it’s a college rule. P.S. don’t ignore the funny south-Indian actor GIFs other students were posting in the midst of the argument. Check out what people online summarised from this debate.

Clearly, the discussion didn’t bear any fruits for the students. But we sure had a good laugh.  LOL!