Acclaimed fashion designer Satya Paul, who was credited for reinventing sarees in the modern age, breathed his last in Coimbatore on January 6. The founder of the eponymous fashion clothing brand died aged 78, reports HT. He had suffered a stroke back in December and was recovering in a hospital.

According to TOI, he was eventually was moved to Isha Yoga Center. His son, Puneet Nanda took to social media and wrote,

“He had a stroke on December 2 and as he was slowly recovering in the hospital. His only wish was to get all the things he was being monitored and poked with (in the hospital) removed so that he could fly away. We finally got clearance from doctors to take him back to Isha Yoga Center, his home since 2015.”

Known for indigenous prints, the Indian designer founded the label ‘Satya Paul’ in 1985. The brand, which is now available across the nation, is popular for its design sensibility.

The official Instagram account of Satya Paul honored their founder and shared various portraits of him as well. 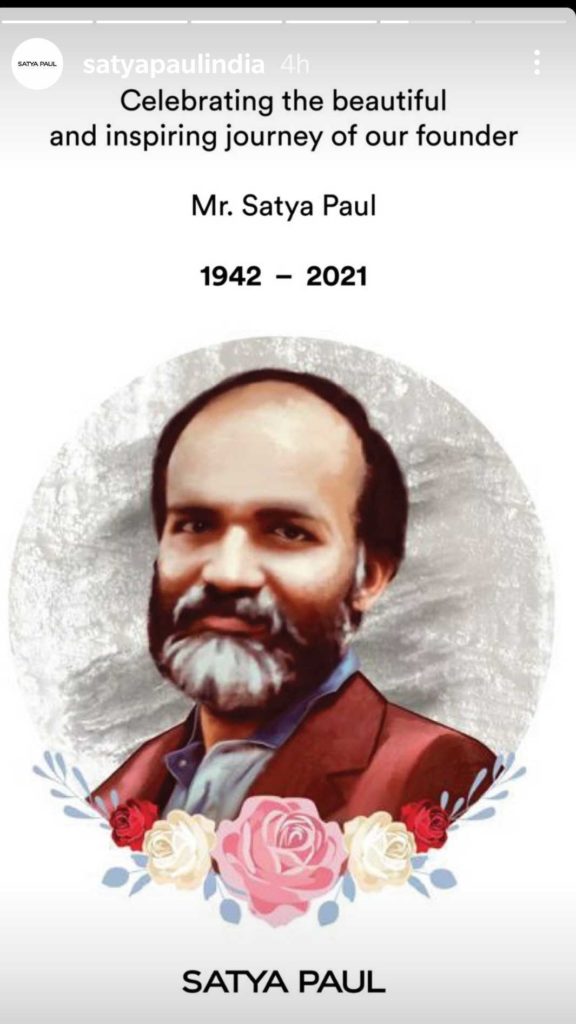 A huge loss to the fashion industry, many fans and celebrities also took to social media to share their heartfelt condolences for the designer.

Sad to hear demise of most influenced Fashion Designer @satyapaul sir.
His immense contribution in the fashion industry will be always remembered, My
heartfelt condolences to @puneetnanda and the family. #OmShanti 🙏

#SatyaPaul, a shining example of what it means to live with immeasurable passion and unrelenting involvement. The distinct vision you brought to the Indian #fashion industry is a beautiful tribute to this. A privilege to have had you amongst us. Condolences & Blessings. -Sg pic.twitter.com/DNMZ0DXvOf

India's iconic fashion designer #SatyaPaul's demise shall leave a void in Indian Fashion Industry. It's an end to an era. Condolences.🙏 pic.twitter.com/CccN6ryxQo

Satya Paul best known as the designer who reinvented the saree for contemporary women passed away today, of natural causes, at the Isha Yoga Center. He was 79. pic.twitter.com/nSPrYsl8NX

To put it rightly, you were the father of modern "designer saree" culture. Every school girl rejoiced wearing a "Satya Paul" saree for her farewell. RIP sir!

When you are thinking about ICONIC INDIAN attire there is no doubt that Satya Paul's name doesnot budge into your mind first. This ICONIC Designer WAS and IS the REVOLUTIONARY bonafide force of INDIAN looks (especially sarees)
.
.#RIP 🙏🏼#SatyaPaul ❤#RIPSatyaPaul 💔 pic.twitter.com/93Bw2odK39

Satya paul ji (1942-2021) a truly wonderful human being. Was blesed to meet and know the journey of this loving and graceful human being. May your soul be in grace. ♥️ https://t.co/kSqp0Pb94A pic.twitter.com/Gwm7YttarO

Our thoughts and prayers are with the ace designer’s family and friends. RIP sir.