Friends Include Delivery Guy In NYE Celebration, Make Him Cut Cake After He Arrived At 12 AM

On the night of New Year’s Eve, most of us were celebrating either with our friends or family. Social media was flooded with pictures and videos of people shouting ‘Happy New Year’ when the clock struck 12. However, there were several people who spent the night working and trying to make others’ night memorable.

Take for example the hospitality industry and those who work in the food delivery business. Chefs, waiters and delivery personnel were up and running on NYE, which is one of the busiest nights of the year. Leaving their loved ones behind, they had to work hard that night.

However, a group of friends ordered food online at 11 PM on New Year’s Eve which was delivered sharp at 12 AM, right in time for New Year’s. So, the guys decided to include the delivery executive in their celebration and make him cut a cake. 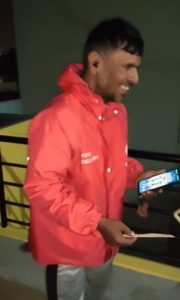 A video was shared by one of the guys in the group named Kishan Srivatsa. In the video, we see how the delivery guy was shy at first but then he went along with the others and cut the cake on the terrace where the rest were partying. 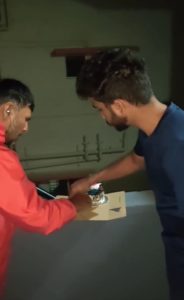 “We ordered food at last minute around 11:00 PM something in Zomato and it reached around exact 12:00 AM so we celebrated new year with the Zomato delivery partner. Unexpected happiness from Unexpected people,” Kishan wrote.

@zomato @zomatocare @ZomatoProHelp
We ordered food at last minute around 11:00 PM something in zomato and it reached around exact 12:00 AM so we celebrated new year with the zomato delivery partner.
Unexpected happiness from Unexpected people #zomato #HappyNewYear #deliveryguy pic.twitter.com/J1Hv9JwCUy

People online expressed their appreciation in the comments section and lauded the kind gesture of the group of friends towards the delivery guy. Here’s what some of them said:

Wonderful gesture. Keep spreading happiness and it will come back in many ways to you! Have a wonderful year ahead for each one of you including the Delivery Agent. May your New Year 2023 be filled with exploration, discovery, prosperity, and growth! Happy New Year Guys!

Hope this sets a wonderful example for others to follow!