Home Entertainment 6 Captivating Roles Played By Deepika Padukone Which Will Be Remembered For...

One of the best actors that the Hindi Film Industry has to offer us, there is no doubt that Deepika Padukone is here to stay for many years to come. How she effortlessly blends herself into a wide range of roles, her ability to leave behind a part of herself in each character that she plays, her ever-increasing talent, sense of style, and of course those dimples has put her on the way to global domination!

As the year comes to an end, here’s a tribute to the finest, most gorgeous actress we have and a look back to the most iconic characters that Deepika has played.

I took my mom along to watch this movie and we couldn’t help but have numerous ‘This is us!’ moments. Everything about Piku – her constant arguments about literally everything, her ‘I am always right’ attitude, her love-hate relationship with her ageing father, dancing to old Bengali classics at family gatherings, and of course, dealing with a family member with constipation was a realistic representation of mostly all Bengali women. Every time I feel like I cannot relate to anyone in this world anymore, I watch Piku and instantly feel a sense of belonging. And it couldn’t have been possible if Deepika hadn’t aced the role!

2. A brave warrior and so much more in Baajirao Mastani.

Mastani was everything – a fierce warrior, a flawless artist, an intense lover, a protective mother, and above all an unprejudiced woman. It was very difficult to move my eyes away from the screen when she was there. Mastani is one of the most powerful characters ever played and not for a moment was it overshadowed by its male counterpart – Bajirao. In fact, I was more drawn towards Mastani than I was towards Bajirao. Of course, Ranveer Singh did a brilliant job, but Deepika sure did steal the show!

3. A vulnerable millennial in Cocktail.

I feel Veronica is one of the toughest and most complicated roles that has ever been written by Bollywood. That is because Veronica is too real, sometimes a bit too much to handle. She hits the club every night in the hope that somehow the booze, loud music, and trippy lights will make her forget, for a moment, how she has lived most of her life without love. Her flashy lifestyle and dating habits were nothing but a coverup for the perpetual loneliness she felt and the insecurities she had. Veronica makes you uncomfortable, sometimes to the point where you begin to hate her, but then you empathise and fall in love with her because each one of us has a part of Veronica within us. 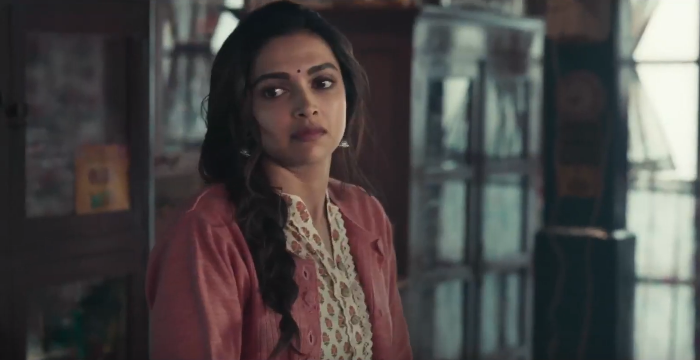 This might not be a full-fledged movie, but Deepika’s small-town humble avatar is unlike anything we have ever seen before. In this video, she does something unexpected when her father leaves her in charge of his shop for a few hours! Within a few minutes, the character teaches us to be fun, ziddi, empathetic, and giving. Also, I love how her look is a departure from her otherwise sensational get-ups. Even in movies like Yeh Jawaani Hai Deewani where she plays a simple girl, the character has grand appearances. However, here she looks, talks, and behaves just like us and makes us feel like we are no different.

Leela’s character is meant to shock. She isn’t the stereotypical ghunghat wearing, a soft-spoken, rule-abiding woman we see in classics. She is, in fact, a gun-bearing “raw” woman who isn’t ashamed of her sexual desires and is unafraid of going against the rules and falling in love with ‘the enemy’. Leela is a representation of what society considers as “too much”. Every time Leela authoritatively puts her point across (rather loudly), I fell more in love with Deepika for doing justice to the character.

Even though Tamasha seems like a movie all about Ranbir Kapoor’s character, it is difficult to ignore Tara who in her way brought light into the film. Tara is every girl who looks for an adventure in her partner, who falls in love with not a person but an idea and hopes that the idea comes to life one day. She is every girl who tries to mould herself to fit into an unhappy relationship and make herself believe that this is how it’s supposed to be. She is also everyone who doesn’t give up on the person they love. Tara is all of us. And I cannot thank Deepika enough for playing this character so gracefully!

Here’s wishing that Deepika returns with more iconic roles that will be remembered for decades to come.