Karnataka: Families Gather Together To Marry Bride & Groom Who Died 30 Years Ago, Watch

Marriages in India are a huge deal, at least it was, prior to the coronavirus pandemic. But still today, it’s incomplete without the couple following the cultures and traditions and taking part in the festivities before committing to each other.

While you might have seen real, living couples getting into matrimony, here’s a wedding of two people who died nearly 30-years-ago.

As bizarre as it sounds, this unique wedding is actually a tradition and pretty common in Dakshina Kannada in Karnataka. It was a Twitter user Anny Arun who attended this wedding and gave us a peek into it.

Initiating the Twitter thread, Arun penned that he attended a wedding wherein the bride and groom were actually dead, about 30 years ago.

I'm attending a marriage today. You might ask why it deserve a tweet. Well groom is dead actually. And bride is dead too. Like about 30 years ago.

And their marriage is today. For those who are not accustomed to traditions of Dakshina Kannada this might sound funny. But (contd)

While he was at the wedding, he shared visuals and gave live updates from the wedding venue. He said that it’s a serious tradition in the area.

“For those who died in child birth, they are usually married off to another child who is deceased during the childbirth.”

He stressed that all customs at this unusual wedding were similar to normal weddings. From engagement to baraat and finally the pheras, everything happens as it would when two living people would get married.

, there will be marriage procession and finally tieing the knots. If you are wondering its easy to fix this marriage, hear me out. Recently groom family rejected a bride because bride was few year elder to the groom!

Anyway I find these customs beautiful.

First up, the groom’s party gives the sacred wedding saree to the bride’s family and then waits for the bride to get dressed for the following rituals.

While bride getting ready groom is already waiting. Isn't that always a thing? 😁 pic.twitter.com/7QvFCiI3Re

In this case, the two thalis with the bride and groom’s clothing personify the individuals marrying. When the bride comes back all dressed up, a family member from both families holds the thali and takes the ‘Saptapadhi’ 7 rounds before sitting for the marriage. 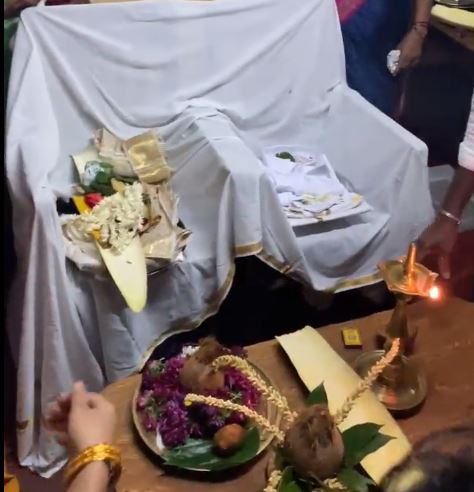 The couple then sits in their respective places, all set to get into matrimony.

And finally bride and groom take their place. Though they are dead, dont think that atmosphere will be like the funeral!! Its not. Its as jovial as any other marriage. Everyone cracking jokes and keep the mood high. Its a celebration of marriage. pic.twitter.com/MoUYIv2gnl

And if you’re thinking the environment would be sad, then you’re mistaken. Everyone attending the wedding is happy for the couple.

Then the other rituals like ‘garland ceremony’ are conducted by the family. Also, kids and unmarried people are not allowed to witness this marriage.

Arun finally reveals the name of the groom and bride- Chandappa weds Shobha.

Funny thing is after all the engagement nobody thought they should ask the name of bride and groom 😁 They were just asking now. 5 minutes before the muhurtam 😁 (guess still better than asking the name after one night stand eh)

Now, the bride and groom hold each other’s hands, in this case, the groom’s shirt hand holding the bride’s pallu, all set for the ‘muhurtam’.

Time to muhurtam. Grooms shirt hand holding the bride’s pallu. They were lifted by the relatives. Time for the wedding. pic.twitter.com/qXoPdq9zwf

This is followed by ‘Kanyadana’ and the ‘Mangalasutra’ rituals that signify that the couple is now married.

The couple now changes sides as per the customs.

This is how they used to do back in the days. After the marriage one guy would be shouting how much money you put in front of the couple while wishing them. It might be bit awkward back in the days I guess. now its usually 'gift in blessings only'. pic.twitter.com/3fMsFptJXQ

The attendees now shower their blessings on the couple and the newlyweds go to the temple to seek God’s blessings.

Newlyweds goes outside and seek blessings from the gods from all directions. pic.twitter.com/tWggkQ4NGG

There’s also the bidai and the welcoming of the bride to the groom’s home.

Finally the bride's family passing the responsibility of their daughter to the grooms family. Usually the most emotional part of the marriage ceremony. pic.twitter.com/giEZtOl2fa

And after the wedding is done adhering to all the customs, it’s time for the feast.

And the couple ‘lives’ happily ever after! Probably in the afterlife! pic.twitter.com/rDUfW8foer

Just like me, people online were fascinated by knowing about this custom. This is how they reacted.

I find it really strange. Unbelievable actually.
Does it pains for the parents of unborn child? How do the siblings react? How do the after marriage life is for people who get these unborned people married? For those unborn people what happens to their karma?

This is so interesting! May I ask what happens now? So the responsibility of the bride is now with the grooms family… but what does that look like considering the circumstances?

This is fascinating. Thank you for the education.
Best wishes to the bride and groom, wherever they may be together. ❤️

Patriarchy here too, in this otherwise very interesting tradition.

Thus , they always keep their dead children in their minds & lives ..
Touching notion .

Were you aware of this unique wedding? Let us know!