In a world where people are hustling to garner scores of views and likes, it’s really difficult to differentiate between the real and the fake. People post all kinds of videos and write all kinds of stuff, that needs to be verified with legit sources to avoid making a fool of ourselves.

And the recent example of this is Indian media being tricked by a parody account’s fake tweet on Pakistani cricketer Babar Azam.

After this, comes Indian singer Daler Mehndi who fell for a spoof tweet online. While scrolling through the internet, the artist might have stumbled upon this tweet by someone that read that in his recent book ‘Spare’, Prince Harry (Duke of Sussex) wrote that at his lowest he listened to the music of Daler Mehndi.

“In the times I felt alone and separated from my family, I always took time to myself to sit back and listen to Daler Mehndi. His lyrics resonated with me and got me through a lot.” (sic)

An innocent artist would be on cloud nine to know that a public figure from the West is listening to his songs as a pick-me-up. But then, one would also contemplate and research more to check its authenticity.

If Daler would have asked his team to find out the reality behind this claim, he would have easily guessed that it was a sarcastic comment posted by a Twitter account that is infamous for posting similar fake statements.

But, nothing of this sort happened and Daler fell for it real bad. Reposting the tweet of this account, the singer went on to write how blessed he feels to have helped Prince Harry with his art.

“I am grateful to the blessings of Guru Nanak, my mom and dad, I created a unique Pop Folk Ethnic Music Style. Love you Prince Harry! God Bless you, In gratitude that my music helped you. @TeamSussex” (sic) 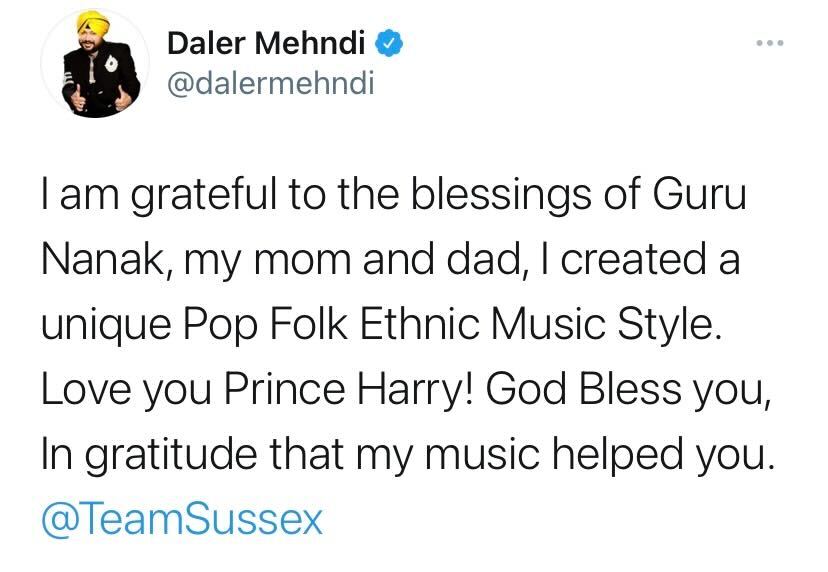 Those who knew the gochi behind this tweet had a field day taking a dig at the singer for falling for the sarcastic tweet. This is how the internet reacted:

Yikes. Daler ji, how do we tell you..

who gonna tell him pic.twitter.com/dhrgUyKZ70

stop! nobody tunak his tananaas

Guys, I think we should tell him. pic.twitter.com/HS6XX0KzkT

don’t tell him, it’s okay, we’re proud of you paji

That’s wrong that everyone’s doing groupizm against the singer in the comments section and not telling him. Koi toh batado inko!