Odisha State Saved 1.2 Million People From The Devastating Cyclone Fani! Here’s How They Did It

Cyclones can be alarmingly destructive and who knows it better than Odisha, which is currently facing the wrath of Cyclone Fani. The tropical monster invaded the state near Puri at 8 am yesterday morning and has completely ripped the place apart. Trees have been uprooted and coastal shacks have been smashed. Lighting polls, hoardings and rooftops have been blown away by the massive force of 120 miles per hour winds.

Having said that, we must say that the state has successfully avoided a disaster. With a regrettable 12 casualties reported, Odisha has managed to see off the storm with minimum damage. And who do we have to thank? The government authorities.

In a bid to alert everyone about the upcoming carnage, they did everything humanly possible! 2.6 million text messages, 43,000 volunteers, nearly 1,000 emergency workers, television commercials, coastal sirens, buses, police officers, and public address systems were used to put the state on red alert with the message “A cyclone is coming. Get to the shelters.”

And you bet, it has worked like anything. Though life at the eastern Indian state has been left paralyzed due to the natural disasters, they have evaded mass casualties. According to experts, this is nothing short of achievement and the result of an accurate evacuation plan. Speaking about the same, former naval officer and head of the Maritime Policy Initiative at the Observer Research Foundation, Abhijit Singh said,

“Few would have expected this kind of organizational efficiency.”

However, according to Bishnupada Sethi, the state’s special relief commissioner, this is not the fruit of a one month plan but the outcome of 20 years of hard work. Ever since a similar cyclone devasted the place in 1999, Odisha has been working hard to prevent such a situation in the future. Hundreds of cyclone shelters were set up and down the coast which has turned out to be the savior this time around.

Here’s how they did it.

As a part of precautionary measures, emergency personnel were ordered to district operation centers. Government workers chalked out lists of people in vulnerable and old houses, particularly the elderly and children. The cyclone shelters were provided with truckloads of food and bottled water. 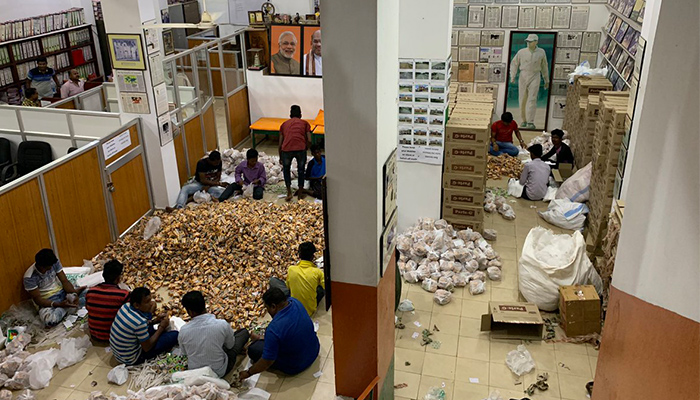 Tourists at coastal hotels were advised to leave for good. To deal with the storm’s aftermath, the state stood equipped with 300 power boats, two helicopters and many chain saws, to cut downed trees. Mr. Singh, a former naval officer said,

“Evacuating a million people in three or four days and providing them with not just shelter but also food is a big achievement in such a short time.”

We bow down to the incredible work of the government and all the people involved in the precautionary/rescue act. With the Fani about to hit West Bengal very soon, we are expecting a similar effort from the state as well. Stay safe, peeps!