Body shaming has sadly become a social evil that is inflicted on people, no matter what their size may be. In the past, Neha Dhupia slammed a magazine’s alleged attempt to fat-shame her. Later, women spoke of cruel nicknames they were given due to their weight.

Now film and television actress Chhavi Mittal, who is mom to Arham and Areeza has opened up about being shamed for being skinny, reports TOI.

Mittal thanked those who are supportive of her journey, but she shut down those leaving nasty and mean comments. She posted a screenshot of the comment by a self-confessed doctor and parent who shamed her for being ‘skinny’. Chhavi maintained that criticising someone for being skinny is just as disrespectful as calling someone fat.

She wrote, “I was quietly going through the comments on my recent videos and there were some nice ones, some not so nice, and some which offered really constructive criticism. Thank you for that! And then there was this sitting there staring me in the face.”

The actress wrote, “Well, dear “Ab Bas”, I just want to say, ab bas. Let’s stop women body shaming women. My hands do a lot for my kids and my community. They may look their age (which is 40) or may look more. But one thing they always do is make me look and feel amazing. Also, calling someone “skinny” is as disrespectful as calling them fat. Dear mothers, have you ever been body shamed?” 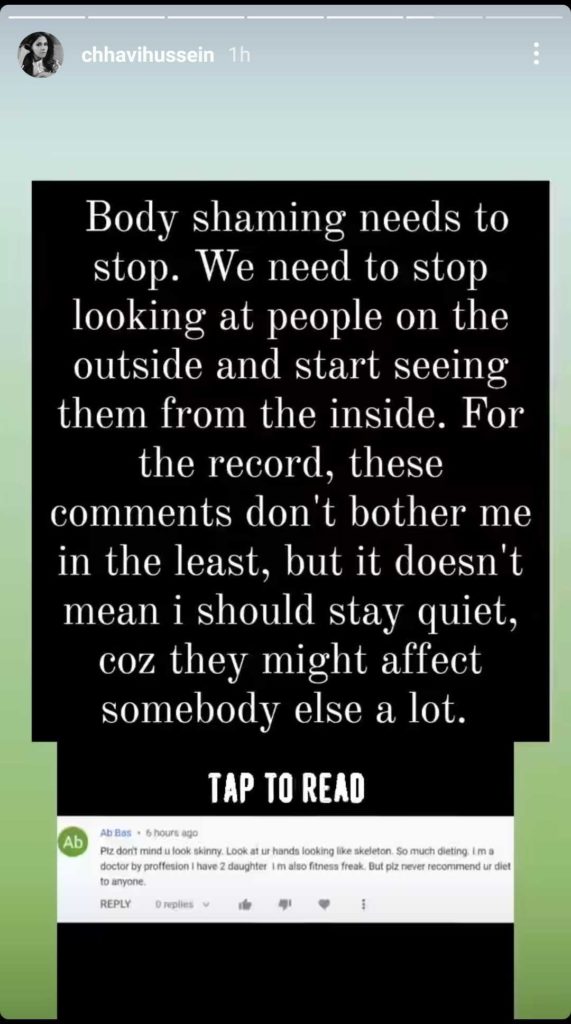 People online showered support for Chhavi in the comment section of her post. Some even spoke of being similarly body shamed. Have you ever been shamed for your size? How did you respond? Tell us.