Even if in 2021 you think climate change is just a hollow phenomenon, then you should look at what heavy rains and strong winds are doing to Chennai. The city has been paddling through the devastating floods for the past few days that have thrown normal life out of gear.

The dirty manhole water has entered homes and temples, trees have been uprooted across the city due to the torrential rain. Traffic diversions and subway failures have reminded Chennaites of their darkest nightmares. Continuous power cuts have also dimmed their hopes. Revenue Minister KKSSR Ramachandran informed that 14 people had died in rain-related incidents, reported The New Indian Express.

Watch how these surfers from Chennai have been taking essentials like vegetables and fruits to flood affected areas. Gourmet Garden and Ocean Delight Surf School to deliver the items to residents who cannot move out because of floods.#Chennai
#ChennaiRains2021 #TamilNaduRains pic.twitter.com/ljtpOzkobo

However, amid such grim situations, several good Samaritans have volunteered to help resume life to normal. Among these is a uniformed female police officer who has taken the internet by storm by her act of courage and kindness.

Braving the rains, TP Chathiram area Inspector E Rajeswarai carried an unconscious, presumably dead daily wage laborer on her shoulders to a nearby hospital. When Rajeswarai was tipped about the man stuck in an uprooted tree at a cemetery, she rushed to the spot barefoot to rescue him. 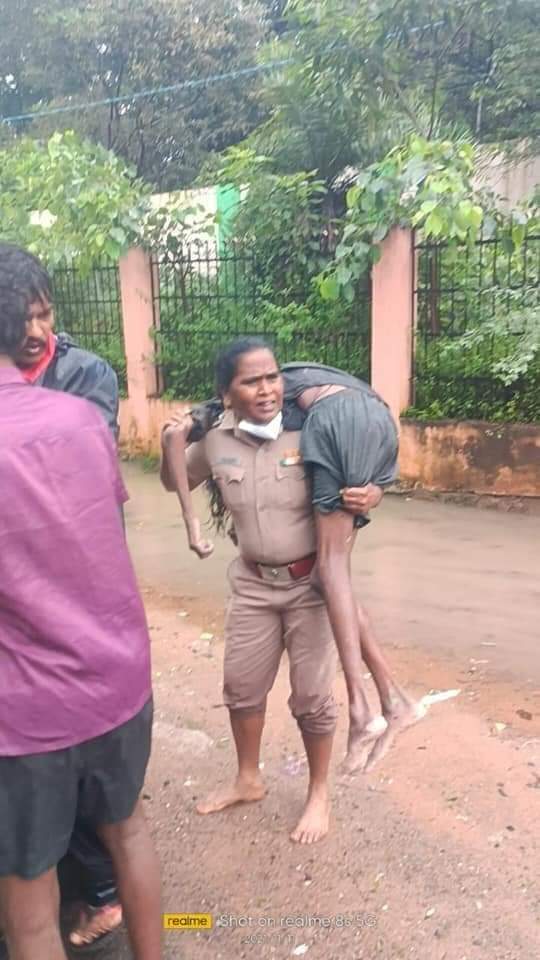 Minutes later, she was seen carrying the 28-year-old man identified as R Udhayakumar, in Chennai’s Kilpauk to safety the video of which has now gone viral online.

“At around 8.15 am, I received a call from the control room saying that a man died after a tree branch fell over him at the cemetery in TP Chatram. My team and I rushed to the spot. On close examination, I realized that he was unconscious,” Rajeswari told The New Indian Express.

She further added, “The duo had drunk last night and Udhayakumar’s friend did not even check if he was breathing. I took him on my shoulder and thought of taking him in our patrol vehicle.”

#WATCH | Chennai, Tamil Nadu: TP Chatram Police Station's Inspector Rajeshwari carries an unconscious man, on her shoulders, to an autorickshaw in a bid to rush him to a nearby hospital.

Chennai is facing waterlogging due to incessant rainfall here.

People lauded the dedicated and valiant officer for her cordial act.

*🙏🇮🇳👍Selfless service during Chennai floods by a policewomen. Nothing but ‘Naman’* pic.twitter.com/vcvfO7pzt6

Selfless service during Chennai floods by a policewomen. Nothing but ‘Naman’ pic.twitter.com/etuJZgp7Vp

In the wake of a calamity, these are the real heroes who emerge. Inspector Rajeshwari from TP Chatram PS carries a man lying unconscious due to #ChennaiRains on her shoulders to admit him in hosp. In the video, she is saying his life has to be saved at any cost. #ChennaiRain pic.twitter.com/KRf5svEw8n

No one has shoulders as strong as you Inspector Rajeshwari 💪Bravo. Helping out an unconscious man in terrible rains and rushing him to a nearby hospital in an auto is indeed laudable. Video by @Shilpa1308 #TamilNaduRains #Police #ChennaiRains2021 pic.twitter.com/VZqc2mLQ4U

Inspector Rajeswari carrying a man Udayakumar who was found unconscious in a cemetery in Chennai.
LET US SALUTE THE WORK.
Great CHENNAI COP AND TEAM.#mkstalin #MKStalinGovt@CMOTamilnadu @chennaipolice_ @tnpoliceoffl pic.twitter.com/iGAWmIkxds

Inspector E. Rajeshwari of the Chennai Police just being the badass she always has been. Seen here rescuing a man found unconscious in the flooded city. Salute! pic.twitter.com/3tfte9AdTR

A Police officer Rajeshwari, saves the life of an young man who got injured by a tree fallen on him.
When others assumed that he is dead, the officer took a brave decision of taking him to the Hospital on her shoulders.
The man's life saved now.#ChennaiRains2021 #ChennaiRain pic.twitter.com/7NLkLDosrc

TP Chatram Ins E Rajeshwari noticed a 28 yr old man lying in an unconscious state. She lifted and carried him on her shoulders all the way. He was taken in an auto to a nearby hospital. Rajeshwari can be heard saying that the guy should be saved at any cost! #Hero #ChennaiRain pic.twitter.com/CMshawLCEs

We salute Rajeswarai for standing by her citizens come rain or storm.