Bollywood actor Anushka Sharma will finally be seen on the big screen as she plays Jhulan Goswami, former Indian captain of the Women’s cricket team, in her biopic ‘Chakda ‘Xpress’.

In the short teaser released by the makers, the ‘Zero’ actor was seen donning the blue jersey and leading the team with an aim to get Indian womens’ cricket the respect and recognition they deserve. 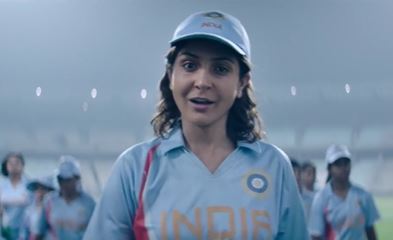 Sharing the video, the 33-year-old Sharma wrote that the film is ‘really special film because it is essentially a story of tremendous sacrifice. ‘

“Chakda Xpress is inspired by the life and times of former Indian captain Jhulan Goswami and it will be an eye-opener into the world of women’s cricket. At a time when Jhulan decided to become a cricketer and make her country proud on the global stage, it was very tough for women to even think of playing the sport. This film is a dramatic retelling of several instances that shaped her life and also women’s cricket.”

And ever since the teaser of the biopic dropped online, people have been sharing their two cents on it. While some were excited to see Sharma back on screen, that too playing the role of the gutsy cricketer, a handful of them pointed out that her Bengali accent looked fake. ‘They could have hired a dusky-looking Bengali actor for the role,’  some said.

Take a look at the reactions:

Why couldn't a dusky actress be cast as JhulanGoswami in #ChakdaXpress ? Why take a supremely lighter slim actress and get her so bronzed up? Beyond me.

Anushka Sharma as Jhulan Goswami ? And even the Bengali accent is so fake. Why??

Couldn't they find a Bengali actress to play Jhulan Goswami ?@biditabag could have played the role easily. pic.twitter.com/u5YIuiYNPn

After Ruining Saina Nehwal , Mithali Raaj ..now comes another Blunder in the name of #ChakdaXpress .

Fake accent of yours ruined everything. https://t.co/Rf6xoV7uqt

So they couldn’t find a dark skinned Bengali actress for #ChakdaXpress? Or someone who could at least get the accent right and they didn’t have to change the skin color?

Bollywood and @NetflixIndia you guys are pathetic grow up man this is 2021 you are making a biopic and zero effort into the look of the actor and the accent,just typical stereotypical attitude!Why couldn't you cast a Different actor who can fit in?#ChakdaXpress pic.twitter.com/gTW1PsabUT

#AnushkaSharma as Jhulan 😂🤣That horrendous Bengali accent😼 Another biopic ruined by these self obsessed stars. Unfortunately the inspiring story will be lost in translation coz of cringe acting. #ChakdaXpress

#ChakdaXpress
My ears after hearing the cringey bangla accent pic.twitter.com/tObkDcn8xl

this is an Netflix release they could have cast an bengali actress for this role and give the biopic movies up everyone is sick of it https://t.co/5SJlJjx3ZX

You have literally brown faced yourself. How embarrassing is that? https://t.co/ouI0C3o7Si

The reasons why they chose Anushka as Jhulan Goswami….
1) Virat is a Cricketer
2) Anushka is an actress and wife of Virat, the cricketer
3) The movie is on Cricket
4) Her brother is the producer.

Hence proved it had to be Anushka. https://t.co/f6HZNbLO01

Some even suggested that the makers could have cast actors like Konkona Sen Sharma, Bidita Bag, Tillotama Shome, Sayani Gupta instead for adequate representation of Jhulan’s character.

I love Anushka but Konkona would have been perfect for the Jhulan Goswami biopic #ChakdaXpress pic.twitter.com/zHlLeHFyOO

Earlier, Manipuri model-actor Lin Lainshram also questioned the makers of the film ‘Mary Kom’ why they didn’t cast a girl from the Northeast to play the role of the Indian boxer Mary Kom in her biopic instead of  Priyanka Chopra Jonas?

Having said that, the teaser does look promising. Looking forward to watching the story of a national hero unfold on the big screens.