Every time we watch a cricket match, we see the camera pan over a female fan in the stadium. While sometimes it’s harmless, the continuous ogling and objectification by zooming in the camera on women sometimes make even us, the viewers, uncomfortable.

Recently, a Twitter account posted a video of a woman from the stadium during the Asia Cup 2022 Final match between Sri Lanka and Pakistan. 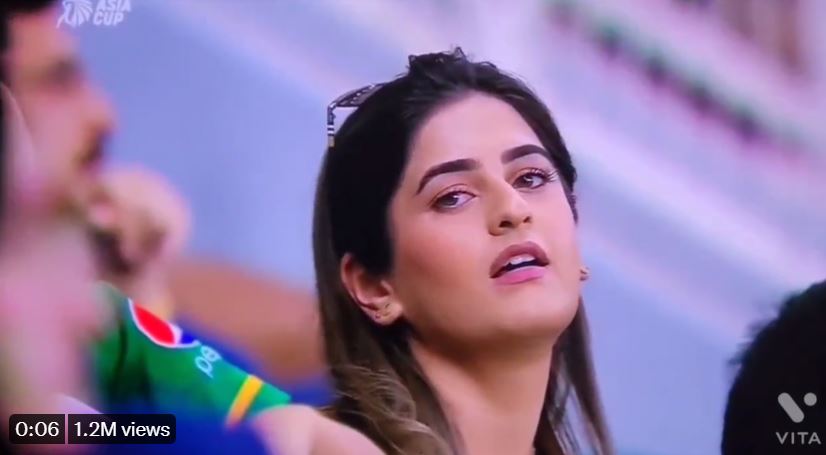 The cameraman kept ogling the woman with his lenses and even played her footage in slow motion. The Twitter user captioned the video, “The only reason to watch full match.”

People online didn’t appreciate the video or the caption of the person. They even called out this practice of shooting random women from different angles in stadiums without their consent and objectifying them as objects of entertainment and pleasure.

Creepy!
The personal comments, attempt to reveal her identity, location, openly sexualising. All wrong. It's different from admiring.
If you want to bring about change in society, start with behavior which is often termed as a "joke" but is clearly not.#WomenSafety https://t.co/TqNs6rm9lo

This is so weird. I can only imagine how disgusting she might just be feeling about y’all objectifying her without her consent. Match bhi nahi dekh sakta banda sukoon se. mc men. https://t.co/GCljI85HOr

Let's have a round of "lanats" for this guy. https://t.co/xTeUI5LAMV

It’s high time someone should take action against those cameramen. What purpose does it serves apart from subjecting women to be objectified and their faces being plastered all over the internet without their permission https://t.co/Xwt7nwmxEf

this is so creepy, imagine going to stadium to watch a match and creepy men are filming you this is so scary fr https://t.co/5E1v8Z8yMR

Repeatedly, Female audience have been turned into eye-candy & surprisingly almost no one ever criticises how creepy it is for cameramen (not camerapersons) to zoom in specifically to their faces in a certain manner,& everyone is like "WOW, my new crush until next match"
1/2@BCCI https://t.co/qfLHvM85ng

Due to such ass*ole and illiterate men, women are not able to visit public places. Shameful ! Passing senseless comments and sharing videos of females on social media is disgusting. Being a Muslim, have some sharam, you also have sister or mother..#PAKvsSL #AsiaCup2022Final https://t.co/EYbfEIVOvt

When these men's will stop this? When they'll let women's to watch match peacefully without the fear that someone will post their pictures/videos with weird captions.

This is 2022! Let women's have that freedom! Get out of your stick mentality! https://t.co/s19K7elSph

the amount of times the camera man just zooms into the faces of so many women at the stadium is just…….. so creepy https://t.co/wSymURAbzM

Women can’t even go watch a match in peace without being ogled at. On television.

Broadcasters must stop getting away with this eye-candy exhibition in the name of sports production. You know what you’re doing.

how can a gender be offended by “praise”

maybe ask your sister or mother or any female in your life how she feels about being oogled and “praised” like that, I’m sure they’ll be able to explain this utterly difficult concept

I would definitely be pissed if someone shoots me like this while I am there to enjoy a match. Now, can’t women even watch a match in peace without fearing that the next day their videos will be all over social media with the hashtag #NationalCrush?