Pet owners can relate when I say we can go to any lengths for our fur babies. For owners, they ARE their own kids, and would you give up on your kid in case of an emergency? You wouldn’t.

Jose Guzman, a man from Southern California, is winning hearts for his successful attempt of saving his dog from his burning house. 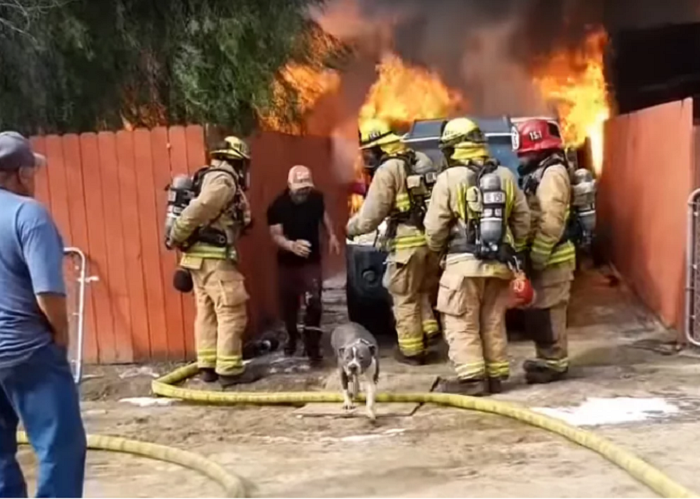 According to sources, Jose was attending a barbeque at his parent’s house with his fiancée and their three girls when was alerted of a nearby fire in his house.

He didn’t think it could be his own house since they had left for the barbeque just an hour back. Turned out, just the house beside his was caught on fire but very soon his home was engulfed in flames too.

Although Jose and his family were safe, his 2-year-old blue nose pitbull Gabanna was trapped inside the house. And Jose had to save him.

He rushed past the firefighters, paying no heed to their warnings, into his blazing house to bring back his dog.

“I wasn’t gonna let her die like that,” he explained.

Jose informed that he found Gabanna hiding inside the bathroom, curled under the toilet.

“I ran through the curtain of fire and made my way through the smoke to the back of the house, where I had her chained up,” he said. “It was hard for me to get her leash unhooked, but I managed to get her loose and we both ran out towards the driveway.”

This shocking cellphone video captures Jose Guzman rushing past firefighters and into his burning home looking frantically for his dog. Just moments later, both of them run out.

“That dog is part of my family. She’s been with us through downs and ups and I couldn’t leave her there. I would do it again if I had to; I would do it for anybody in my family”, said Jose.

The video brought netizens into tears and they are all lauding Jose for his act.

"at least one of us deserves dogs"

The love between a man and his pitbull. That dog would probably die for him too

Good for him! He saved his baby! He was willing to risk his life to save his fur friend. He probably knew where the dog would hide, so happy that both made it out safe!!

When someone you love is in mortal danger, some of us will risk everything.

Any true animal lover would do that for her/his pet. God bless them both. Xo

Damn. That's love. I get it. I would do anything for my pup.

That’s me saving my dog 😭

The firefighters can be as pissed as they want, the bystanders can criticize him to hell and back, but that’s what you do. Hope him and his dog are well.

Jose Guzman's willingness to sacrifice all for his canine friend is absolutely magnificent (tears of joy). @NuloPetFood, @CanidaePetFood, @Purina, @PetSmart, @Petco & others: I'd be racing to give this guy a lifetime supply of pet food and/or pet supplies.

Although Jose and Gabanna have had some injuries due to the fire, the two are now healthy and running.

That’s the kind of love owners share with their dogs. And if the dog were you, it would risk its life for you too!