If you have been on the internet of late, you would have seen a picture of a burqa-clad woman walking on a street wearing a Swiggy delivery bag on her shoulder. At first, one would think that she’s a delivery partner of the food delivery giant. However, that’s not the reality behind that sad picture. 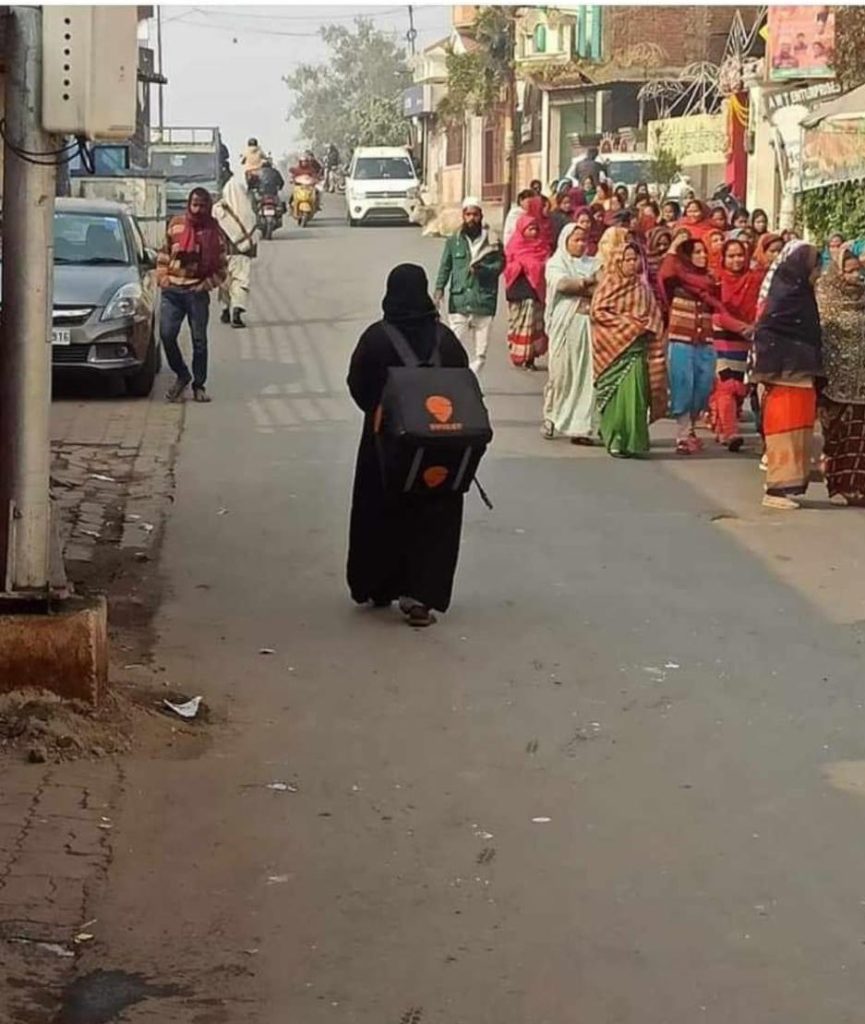 According to NDTV, the woman who has now become an internet sensation is identified as Rizwana. She had been married for 23 years to an autorickshaw driver. After her husband’s rickshaw was stolen, he ended up begging on the streets. And suddenly, one day he left home and never returned.

“He started begging on the streets after losing the only source of livelihood. He was extremely stressed and not knowing what to do, one day he left home and didn’t come back,” Rizwana told a news publication.

Her husband drove an auto rickshaw but one day the rickshaw was stolen. “He started begging on the streets after losing the only source of livelihood. He was extremely stressed and not knowing what to do, one day he left home and didn’t come back” Rizwana said .

After her husband isolated her and her four kids three years ago, the woman didn’t give up on them. Instead, she took to the streets of Lucknow to sell disposable plastic items to make ends meet.

By earning a mere sum of Rs 60-70 every day, the hardworking woman got her eldest daughter married two years ago. As for her other kids, daughters Bushra (19) and Nashra (7), and son Mohammad Yasin (11), she wants everyone to get a proper education.

“I recently got my younger daughter admitted to a school, and will get my son admitted next year. Along with the delivery work, I also work as a domestic help in a bid to make more earnings. I walk about 6-7 km, but my total savings at the end of any given day at work is only about ₹ 60-70.”

The family of four currently lives in a one-room house in the Janata Nagri Colony on Jagatnarayan Road in Lucknow.

Rizwana lives in a congested 10×10 room with daughters Bushra (19) and Nashra (7) and son Yaseen (11). An uneducated and single mother has to face severe hardship to raise her kids and Rizwana works the entire day to earn money for her family.

The woman works as domestic help in a couple of homes in the morning and evening. To earn extra bucks, she supplies disposable cups and glasses to street vendors.

“I earn 2-3 rupees per packet which amounts to 5-6 thousand rupees a month. I walk some 20-25 kilometers daily to sell the items to street vendors. I walk so that I can save money to meet petty expenses at home,” Rizwana said.

“I earn 2-3 rupees per packet which amounts to 5 -6 thousand rupees a month” the woman poured out her heart. “I walk some 20-25 kilometers daily to sell the items to street vendors. I walk so that I can save money to meet petty expenses at home” -Rizwana Said

As for the Swiggy bag seen on her, she bought the strong bag off a market after the bag in which she kept her disposal products got torn.

“I sell disposable cutlery, visiting door-to-door and local shops. I used to carry the items in a bag which got damaged. Then I purchased this ‘Swiggy’ bag for ₹ 50,” NDTV quoted her saying.

Clearing the air, she said that she doesn’t have anything to do with Swiggy.

“I don’t work for them. I needed a strong bag to keep the items and so I spotted this one from a street vendor which cost me 50 rupees.”

The social media is touched by a picture of a woman in Hijab, walking on the street with Swiggy's signature delivery bag on her back.

The Mooknayak team tracked down the woman walking in a burqa with a Swiggy bag .

People online were touched by her inspiring story. This is how they reacted:

Dear @Swiggy please make a space at your organization for this woman, she doesn’t work with you because she is not educated enough to get enrolled but if company decides it can have her enrolled.

A very good thread which may get noticed and the women get some help. God bless to the reporter and your team for this. ❤️🙏 no words for the women, speechless. No doubt mother is the strongest Pillar in a family.

Any chance I can donate for younger kid education ?

I’m positively hopeful that there must be some government schemes that help people like Rizwana setup a small shop or store. She and others like her who are really struggling financially could greatly benefit.

Appreciated it if could you connect me to this brave woman. Would like to help her as best as I could.

Good to see so many people wanting to help and support this woman. More power to you!