Nothing can come in between the education of these guys. Earlier this year, defeating poverty, a fruit seller’s daughter topped Bihar class 12 boards. Now a bride rushed to the exam hall, decked in her shadi ka joda to take the exam right before taking the pheras.

According to a report by DNA, the bride Shivangi Bagthariya, hailing from Rajkot, Gujarat, decided to keep her entourage waiting because she wanted to take the exam first. 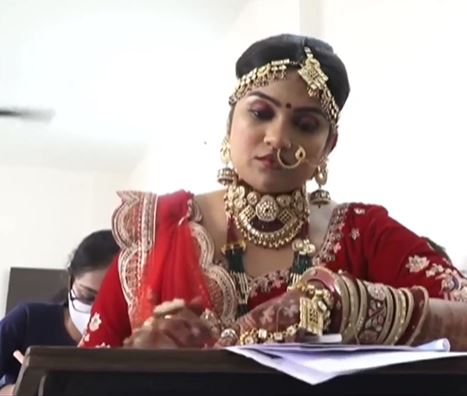 Prioritizing her studies over her wedding, she decided to make the most out of the situation and ended up appearing for her university exam laden with jewelry and makeup. An undergraduate student, she appeared at Shanti Niketan College in the morning to take the exam of the fifth semester of Bachelor of Social Work (BSW), reported Times Of India.

“When the date of my marriage was finalized, the examination schedule wasn’t declared. As luck would have it, the date as well as the morning muhurat of marriage clashed with my examination.” 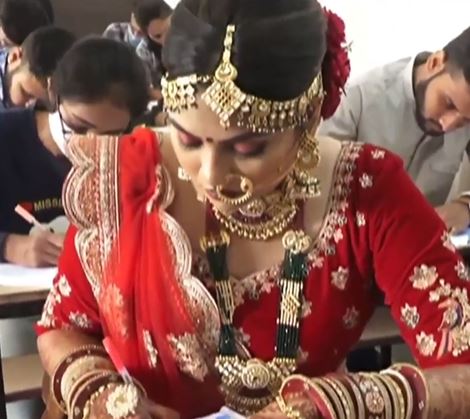 Her decision was supported by her husband and both their families. “I asked my parents as well my would-be husband’s family to tweak the muhurat so I can take the exam. Education is a must for all, including women. Parents and girls should give importance to education,” Bagthariya added. After taking the exams, the bride returned to get married.

The video of her taking the exam has now gone viral.

This is what people online think of her decision.

I feel sad to say that even today, several girls are forced to drop out of their studies or leave their jobs just to get married and manage household chores. Women like Shivangi who prioritize education over other things are leading by example.