Recently, the story of Jyoti Kumari, a 15-year-old girl from Bihar who carried her injured father on a cycle and paddled for 1,200 kilometres to reach her hometown shook the people of the country. Her strength and endurance inspired the Cycling Federation of India who then called her for trials which she later respectfully declined because of her studies.

In a similar incident, an 11-year-old boy carried his parents on a tricycle cart and paddled for 600 kilometres from Uttar Pradesh’s Varanasi to their village in Bihar’s Araria amidst the lockdown, reports The Wire. 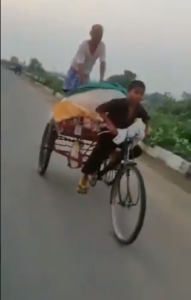 A video of the boy cycling with his parents sitting behind him on the tricycle cart was posted on Twitter.

In an interview with The Wire, the 11-year-old, Tabaarak, revealed how his family is “landless” and they live in a hut on a piece of land owned by someone else in a village in Araria. His mother is blind due to a past injury. His father worked at a marble shop and recently suffered an injury where he fractured his leg after a rock fell on it.

Tabaarak saw thousands of people taking the road to go back home and he mustered up the courage to do the same.

“We ran out of food. I have a tricycle cart, so we started the journey thinking that we are dying here (in Varanasi) anyway. But, God and the people we met on the way helped us reach home safely,” said Tabaarak’s father.

Tabaarak’s mother revealed how a few people helped them with ration for their journey.

“We carried an LPG cylinder and other belongings with us. We would sleep on the roadside and cook food wherever we could get water.”

The family is currently at a quarantine facility in a government school near their village. 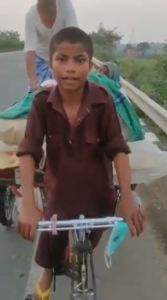 As the video went viral, it grabbed the attention of several people including popular chef Vikas Khanna. He shared the video, called the boy a “hero”, and asked if anyone could help him locate the little champ. He revealed he had a “big surprise” planned for him.

Can someone help me find this HERO. #MiragicKid.
I’m planning a big surprise for him. ❤️
[email protected] https://t.co/l2U9s4yywX

Journalist and activist Ruchira Gupta came forward and identified as someone from her own village. She let Vikas Khanna know that she can visit his home too.

@TheVikasKhanna he is from my village in #Bihar!!! I can get to his home. My parents & @apneaap is there. What a coincidence. https://t.co/2glwTUxYce

Vikas Khanna hasn’t yet revealed what the “big surprise” is but said that the boy made him feel “proud, emotional and hopeful” of humanity.

Thank you @iamrana ji for posting it.
This little kid made me proud, emotional and hopeful of all of humanity. 💪🏼@Ruchiragupta ji pls connect me. ❤️🙏🏼😍 https://t.co/P4pfYXfmpd

People on the internet are lauding Vikas Khanna for his kindness. The chef has taken the responsibility of feeding thousands of poor families distraught by the lockdown ever since the coronavirus spread in the country.

You are special Chef Vikas.
I've been following your work and truly the way to anyone's heart is via the stomach. You've not only proved that in the kitchen but outside it too by feeding so many who needed that help.
God bless you @TheVikasKhanna

Wow ! Waiting to see your surprise for him…
He deserves it!

Recently, people on the internet came together and set a brilliant example of kindness by donating for Chhote, a humble fruit seller in Delhi, whose mangoes got robbed by a mob of selfish people. He suffered a loss of Rs 30,000. But thanks to the power of the internet, a total of Rs 8 lakh in donations came to help him!

We hope Vikas Khanna helps the little boy. Can’t wait to see what’s in store for him!