Biker Is Miraculously Saved After Bolero Rams Into An Out-Of-Control JCB, Watch Video

In a horrifying incident, a man’s life was saved by seconds after an SUV collided with a JCB which was almost about to hit him.

According to a report by News18,  the man was sitting on top of his bike on the roadside. A JCB driver probably lost control leading the vehicle to move towards him with speed. An SUV, identified as a Mahindra Bolero, arrived from the opposite direction came in between the JCB and the bike and hit the JCB, saving the man’s life. 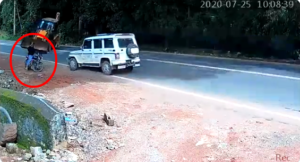 The front of the car did suffer a few damages but overall it was fine. The driver was unharmed too. 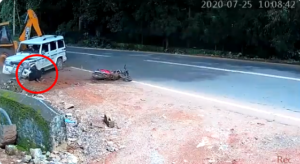 A video of the incident has gone viral on the internet. Have a look:

People on the internet are praising the car for saving the man’s life. Many tagged Anand Mahindra, Chairman of the Mahindra group, and thanked him for making a life-saving vehicle.

This reminds the movie transformer @anandmahindra
Saving of Life by Machine https://t.co/OR62idWQcY

Koi nahi hai takkar me! Looks like God has sent @MahindraBolero to save life. I feel so proud that #Bolero is a Made in India vehicle and offers unmatched performances unlike any other foreign expensive vehicle. @anandmahindra Thank you for this Beast. https://t.co/FoXzeG9gpP

Really the JCB was abt to hit d man in bike so harshly tht d man had 100% chance to die on d spot as JCB was on full speed lost control bolero ne bachaliya
Bilkul time pe Bolero ko pahancha di God ne to hit JCB @anandmahindra thanks for giving this strong vechile to india https://t.co/oq3Ne67FNi

Power of made in india @anandmahindra https://t.co/Zygoy9pLUc

Thank you @anandmahindra for "The Hulk" on the road. https://t.co/KS7yVZZ0rf

He is one of lucky person https://t.co/9FqLxtl9Kn

Mahindra is the off-road king and a full metal body that's why it did not flip. Kuddos to @anandmahindra https://t.co/J93zmIjm19

Any other car could have crashed into pieces. @MahindraBolero still ruling the road. @anandmahindra https://t.co/thqz7CRef9

No injuries have been reported post the incident. Thank god, everyone is safe!