Woman Puts Up Signboard For Her Bicycle Thief, Gets Surprising Doorbell Responses From Strangers

Theft is such a common phenomenon that people who’ve been robbed usually get angry about it a for a while and then let it pass. Pickpocketing, robbing a house, a shop or even vehicles – crimes like these go unnoticed by many. But every once in a while, these crimes make for really funny-entertaining-interesting story. Like that thief who wore a plastic bag as a mask before robbing.

Another intriguing story of a theft happens to be that of a woman from New York who was robbed of the expensive bike that she used to get to work.

After her bike was stolen, Amanda Needham, hung a huge cardboard sign outside her landlord’s Brooklyn brownstone. The sign read:

“To the person who stole my bicycle, I hope you need it more than I do.

Next time, steal a hipster’s Peugeot. Or not steal!

According to a report in The Washington Post, Amanda confessed that she found it really foolish to hang that sign, but the least she wanted to do was convey the message that her bike was stolen. Moreover, she even confessed that she and her husband were partly responsible for the theft since they didn’t lock the bike carefully. However, soon after she hung up the sign, interesting things started happening.

On Wednesday morning, two African American young men came to her doorstep and one of them, Michael, offered her a bike he had lying around, so she could get to work. Amanda said,

“I was flustered by the offer and tried to deflect, saying I really appreciated it, but wasn’t sure if I’d be able to use it. What was clear, however, was that it wasn’t about the bicycle, it was about their desire to help. I accepted, touched by the humanity of the gesture.”

Despite her husband yelling at her to take the sign down, she was hellbent on keeping it until the weekend at least.

On Saturday morning, a middle-aged Hispanic woman buzzed her intercom and told her she made her husband go round the block twice to read her sign.

She was concerned that the bike Amanda needed to get to work was stolen. She had even looked up the bike and found it to be expensive! They had a nice chat after that and the woman gave her a warm hug before leaving.

Amanda was so overwhelmed by the response, she said,

“I was invigorated. This sign was changing things. So much decency was pouring out from such a simple gesture of opening myself up to the universe.”

Soon after this, a third person came to her door asking about the sign. Turns out, this man was an art dealer and he even offered to buy the sign for $200, which was the money Amanda had spent on the bike.

The man, named Steve Powers, told her that her sign had started an Instagram conversation called #KarmaCycle.

Amanda took the bike that Michael had given her, to the local repair shop and got it fixed.  She wanted to give it to someone who needed it more than her. In exchange for fixing it, she helped the store’s female mechanic set up her Instagram and Twitter to continue the cycle. 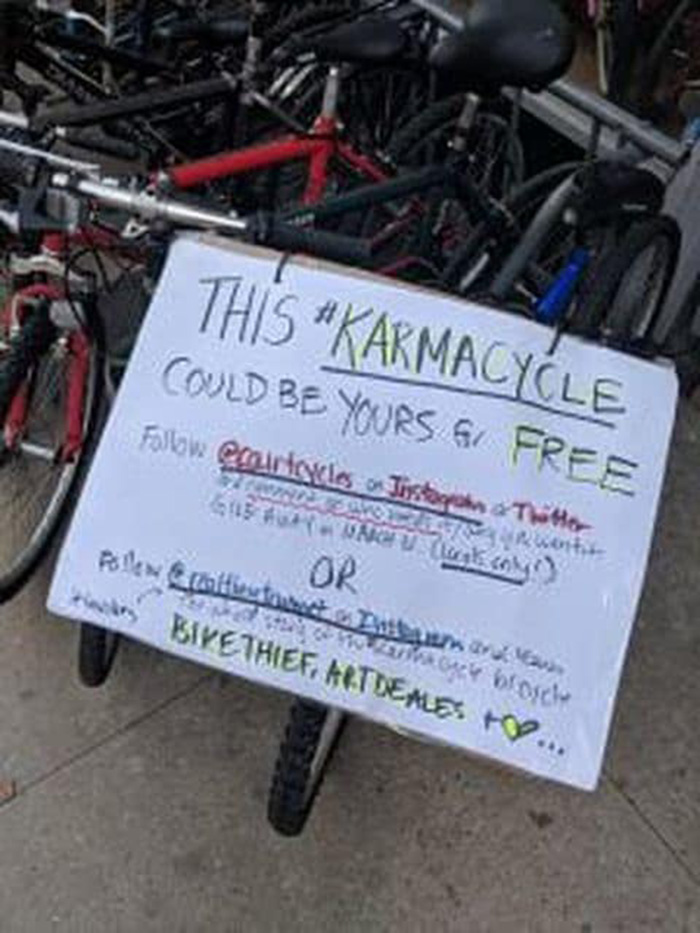 This story is proof of good still lurking around in all of us. A kind gesture can not only make someone’s day better, it can inspire them to be kind to others too. Whether you’re a firm believer or not, karma really is the answer to most of our problems. It does its job without fail and if you’re lucky, you get to witness it firsthand too.

So keep the #KarmaCycle going, folks!